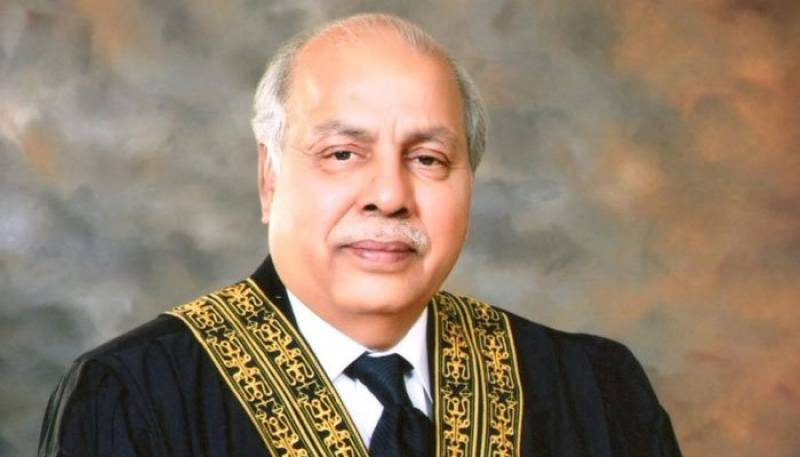 ISLAMABAD – Chief Justice Gulzar Ahmed Friday admonished the Punjab IGP for failing to take action to safeguard the Hindu temple from a mob in Rahim Yar Khan, directing him to arrest all culprits involved in the incident at the earliest.

Over a dozen men had vandalised a Hindu temple in Rahim Yar Khan, shouting slogans and desecrating idols in the place of worship. The video clip of the incident went viral on social media, drawing sharp criticism from rights activists in Pakistan.

During the hearing today, the CJP expressed displeasure over the incident and reprimanded the officials, saying the attack has done serious damage to Pakistan’s reputation around the globe.

He said the police acted as a silent spectator while the mob vandalised the temple. “What were the police and administration doing?” the CJP asked.

To this, IGP Inam Ghani said the assistant commissioner and ASP were present at the scene, and that the administration’s priority was to provide security to the 70 Hindu families near the temple.

“Terrorism clauses have been added in the FIR,” he said.

“If the deputy commissioner and the DPO cannot perform their duties, they should be fired,” CJP Gulzar stressed.

IG Inam Ghani informed the court that no arrests have been made so far in connection with the case, when Justice Qazi Amin asked as to what action had the police taken.

At this, CJP Gulzar said the court would focus on the legal perspective of the case.

“Three days have passed, but no one has been arrested,” said the chief justice, disappointed.

Justice Amin said police has failed to perform its duty.

Issuing directives to take action against the culprits, the Supreme Court ordered the officials to submit a report on the next hearing, which has been scheduled on August 13.

Pakistani lawmakers at the National Assembly denounced the Rahim Yar Khan attack, saying that such incidents were unfortunate.

“No arrests have been made yet neither did any government officials arrive at the place,” said PML-N MNA Khael Das Kohistani. “We want the interior minister and the prime minister to tell us why no has been arrested yet.”

PTI MNA Jai Prakash said the temple was desecrated due to the police’s negligence, adding that the incident had taken place three days ago. “Prime Minister Imran Khan took immediate notice of the incident,” he added.

PTI MNA Shunila Ruth said when the Bhong temple incident took place, she was speaking online to the DPO Punjab and IG Punjab.

Another MNA, Lal Chand Malhi, said these incidents were “backed by a plan”, adding that the main objective of such incidents is to defame Pakistan.