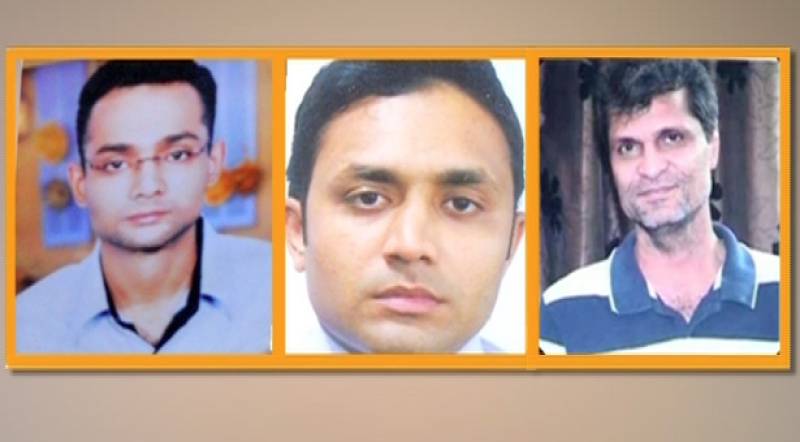 The three prime suspects, who were in unofficial custody of Pakistani security agencies for over an year, were produced in court of duty judge amid high security despite local holiday.

The judge ordered FIA to present all three people in custody before an anti-terrorism court on Monday. The case has been registered under anti-terrorism act and hence it must be pursued in ATC, the judge ruled.

Earlier on Saturday, the Federal Investigation Agency (FIA) registered a case against Muttahida Qaumi Movement (MQM) chief Altaf Hussain and six others for allegedly hatching a conspiracy to murder senior party leader Dr Imran Farooq in London, after five years of the murder.

According to an FIA official, the Counter Terrorism Wing registered the first information report under Sections 302, 34, 109, 120B and 7 of Anti-Terrorism Act. Besides the MQM chief, other nominated accused are Iftikhar Hussain, Moazzam Ali Khan, Khalid Shamim, Kashif Khan Kamran and Syed Mohsin Ali.

They have been booked for preparing the alleged conspiracy, assistance and ultimately assassination of Dr Imran Farooq. London Metropolitan Police have already been investigating the case.

Their investigators visited Pakistan in July and September this year to interrogate suspects Moazzam Ali Khan, Khalid Shamim and Mohsin Ali, who are in the custody of FIA.

Moazzam Ali, who had allegedly facilitated Dr Imran Farooq’s killers, was arrested in March from Karachi while Khalid Shamim and Mohsin Ali were held by the Frontier Corps Balochistan in Chaman.

At a time when MQM is contesting Local Bodies election in Karachi, the nomination of its chief – living in self-exile in London – in the Imran Farooq murder case is being seen as a major blow to the party.

In September, MQM's Mohsin Ali confessed to Scotland Yard investigators of being involved in the brutal murder of Dr Imran Farooq, the MQM’s founding leader, in London.

The suspect confessed to his direct involvement in the killing of the MQM leader,” an official involved with the investigation process said.