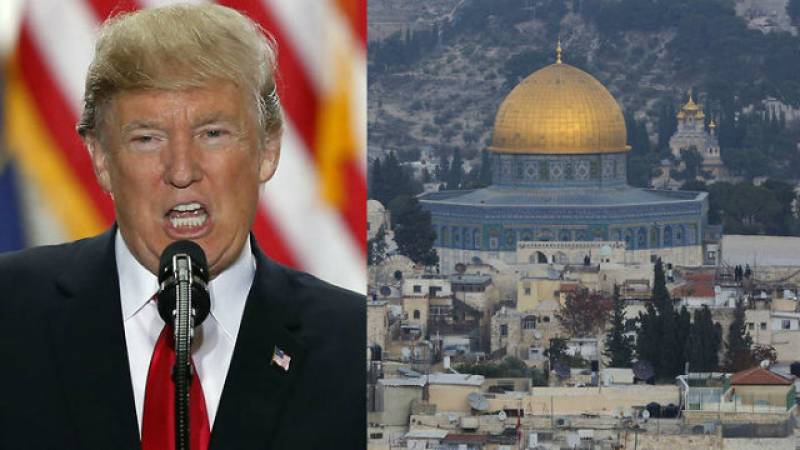 WASHINGTON - The United States recognised the holy city of Jerusalem as the capital of the illegal state of Israel, President Donald Trump announced Wednesday, plunging the Middle East into a deeper crisis.

“I have determined that it is time to officially recognize Jerusalem as the capital of Israel,” the president said during a speech in the Diplomatic Reception Room of the White House, ordering the State Department to move the US Embassy in Tel Aviv to Jerusalem.

Trump added, “Jerusalem is not just the heart of three great religions, but it is now also the heart of one of the most successful democracies in the world.”

The move, that comes despite intense Arab, Muslim and European opposition, would upend decades of US policy and risk potentially violent protests.

During a call Tuesday morning, Palestinian leader Mahmoud Abbas said moving the US Embassy would present a grave threat to Middle East peace after Trump reportedly confirmed the move. Turkey has threatened to cut off all diplomatic ties to Israel in response.

On the 2016 campaign trail, Trump repeatedly promised to move the embassy. Earlier this year, Trump visited Israel on his first foreign trip as president and prayed at the Western Wall. He was hosted by Netanyahu and his wife in their home.

The US Congress has already voted to move the embassy through the Jerusalem Embassy Act, which the president signed on Wednesday.

The US would be the first country to move its embassy to Jerusalem, which is claimed by both Israelis and Palestinians. Other countries who have diplomatic relations with Israel keep their embassies in Tel Aviv.

But the embassy move would not be immediate and could take at least three or four years.

US government employees in Israel have been warned not to travel to the West Bank and Old City as riots from Palestinians have been planned.