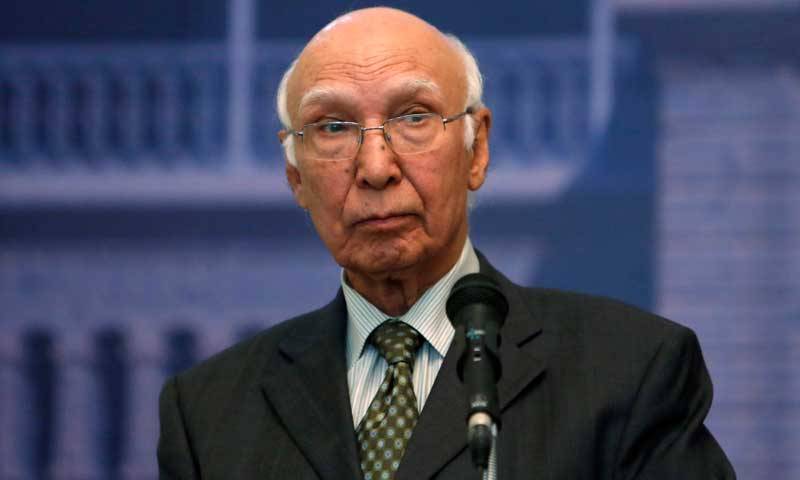 He was addressing the third meeting of Quadrilateral Coordination Group of Afghanistan, Pakistan, the United States and China on Afghan peace process in Islamabad.

The advisor emphasized that political reconciliation is the only viable option for promoting peace in Afghanistan. He said violent activities will have to be stopped for the success of the dialogue process.

He said this process is a clear manifestation of our shared commitment to take joint steps to check the menace of terrorism for long term peace and stability.

He expressed the confidence that the meeting will now focus on early adoption of roadmap for reconciliation process and holding of direct talks between Afghan Taliban and Kabul government as early as possible.

Meanwhile, Quadrilateral Coordination Group on Afghanistan has agreed to continue joint efforts for setting a date for direct peace talks between Afghan government and Taliban groups.

A joint statement issued at the conclusion of its meeting in Islamabad, the Group stressed that the outcome of the reconciliation process should be a political settlement that results in the cessation of violence, and durable peace in Afghanistan.

The meeting also adopted a roadmap stipulating the stages and steps for holding early direct peace talks between the authorized representatives of the Afghan Government and Taliban groups.

The member countries i.e. Pakistan, Afghanistan, China and the United States called on all Taliban groups to join the peace talks.

The Group agreed to continue regular meetings to ensure a smooth way forward in the peace and reconciliation process in Afghanistan.

Its next meeting would be held in Kabul on 23rd of this month.