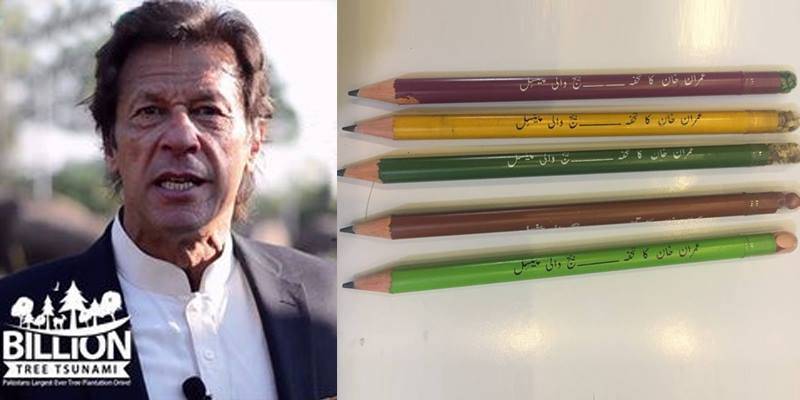 KARACHI - Pakistan Tehreek-e-Insaf on Sunday distributed ‘Pencil with Seeds’ among schoolchildren as a part of Imran Khan’s Million Tree Tsunami campaign in the port city.

This is a very innovative concept to encourage children to plant. The rubber part of pencil has a degradable capsule that contains seeds of cucumber, lady finger, brinjal, spinach, and coriander.

A test run of Beej wali Pencil (Pencil with Seeds) was carried out by PTI, under the supervision of Dr Arif Alvi, in Qamrul Islam School Punjab Colony NA247 PS111 in the girls section. Boys section was done later.

Test run of بیج والی پنسل yesterday in Qamrul Islam School Punjab Colony NA247 PS111 in the girls section. Boys section was done later. Children responded well on pollution, global warming and need for plantation. The excitement on getting a the pencil was out of this world 😊 pic.twitter.com/LhJUZFUli0

The PTI lawmaker took to Twitter to share that children responded well on pollution, global warming and need for plantation.

The Million Tree Tsunami is a campaign to Inspire, Challenge and Mobilize the citizens of Karachi to plant trees and make it healthy, clean and green.

We are distributing these free to school children in Karachi. If any school wants them they should call 021-35171009 on weekdays for details https://t.co/tqkb6Bv6rY

On the other hand, last year, PTI-led Khyber Pakhtunkhwa added three-quarters of a billion new trees, as part of a "Billion Tree Tsunami" aimed at reversing worsening forest loss.

The Billion Tree Tsunami, which involves adding trees both by planting and natural regeneration, is backed by Imran Khan's Pakistan Tehreek-i-Insaf (PTI).

It aims to turn around deforestation and increase the province's forested area by at least 2pc.

Years of tree felling have reduced Pakistan's forests to under 2pc of its land area, one of the lowest levels in the region, according to a 2015 UN Food and Agriculture Organisation report.

About 40pc of the country's remaining forests are in KP.

About 13,000 government and private nurseries, in almost every district of the province, are now producing hundreds of thousands of saplings of local and imported tree varieties, including pines, walnuts and eucalyptus.

The nurseries have provided about 40pc of the new trees in KP; the remaining trees have come from natural regeneration in forests now put under protection.

Many small-scale nurseries, producing up to 25,000 saplings, have been set up with cash advances and a guaranteed purchase agreement from the provincial government.

The project has proven so popular that the federal government has now begun implementing its own "Green Pakistan Programme".

The aim of the programme is to plant 100 million trees all over the country over the next five years.