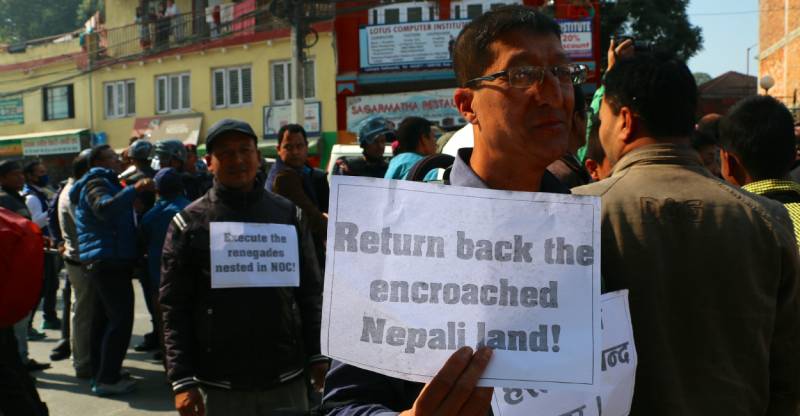 Examining the historical build-up to the current 'unofficial blockade' of Nepal by India, the core problem seems to be the unregulated 'open-border policy' adopted by the mountainous nation with its giant neighbor. Nepal is facing a classic case of power struggle and power sharing, with the Madheshis (Indian immigrants in Nepali border areas) adamantly seeking more power, and predominant power structures resisting it.

This was bound to happen given several decades of unregulated open-border. For decades Nepal and India shared open borders allowing free movement of goods and people. This has allowed a considerable population from India to settle within Nepali territory (in border areas) and acquire Nepali citizenship, thus entitling themselves and justifying their rationale to demand 'more power'. The power tussle is explicitly internal with fears of future consequences.

Resistance and acceptance is a natural process. There is mistrust among the indigenous power exercisers (Hill people) regarding the immigrants (Madeshis) on the basis of socio-economic & cultural grounds (roti-beti relationship). The real fear rests in disintegration and integration. That is, disintegration of certain plain portions (terai) of Nepal integrated into bordering Indian provinces, with the 'negotiated power' and its potential cultivation with cultural 'roti-beti' associations in near/far future. This fear and mistrust is not openly shared and communicated in order to develop a political process to establish trust amongst natives and Madeshi Nepali. Hence, the propagated clashes of ideologies, power differences, evolved unofficial blockade, shortage of fuel, disruption of economic activities, sufferings of the people (both native and Madeshi) follows.

Few decades in time, into the future, with no critical analysis of the unregulated open-border policy of Nepal-India, especially concerning free movement of people, another struggle of similar nature is around the corner. Couple of hundred thousand Indian immigrants, again in a couple of decades could easily settle in the Nepali land and demand for more power on the basis of their proportional size. A logical solution to problems surfaced in recent times, yet to be formulated, may as well ensure prevention of such struggles in the future either through the instrument of political process or constitutional amendment or dialogue, as necessary.