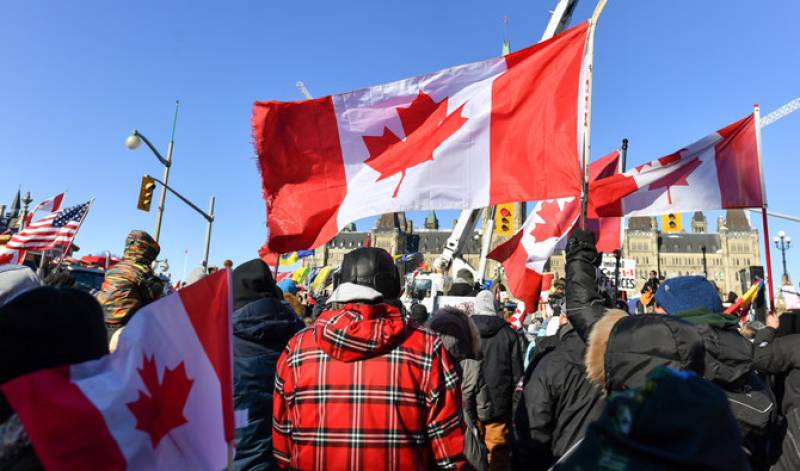 TORONTO – The mayor of Canada’s capital declared a state of emergency on Sunday as protesters opposed to COVID-19 restrictions continued to paralyse Ottawa’s downtown.

In a related development, a former US ambassador to Canada said groups in the US must stop interfering in the domestic affairs of America’s neighbour.

Mayor Jim Watson said the declaration highlights the need for support from other jurisdictions and levels of government. It gives the city some additional powers around procurement and how it delivers services, which could help purchase equipment required by frontline workers and first responders.

Thousands of protesters descended in Ottawa again on the weekend, joining a hundred who remained since last weekend. Residents of Ottawa are furious at the nonstop blaring of horns, traffic disruption and harassment and fear no end is in sight after the police chief called it a “siege” that he could not manage.

The “freedom truck convoy” has attracted support from many US Republicans including former President Donald Trump, who called Prime Minister Justin Trudeau a “far left lunatic” who has “destroyed Canada with insane Covid mandates.”

“Canada US relations used to be mainly about solving technical issues. Today Canada is unfortunately experiencing radical US politicians involving themselves in Canadian domestic issues. Trump and his followers are a threat not just to the US but to all democracies,” tweeted Bruce Heyman, a former US ambassador under President Barack Obama. He said “under no circumstances should any group in the USA fund disruptive activities in Canada. Period. Full stop.”

After crowdfunding site GoFundMe said it would refund or redirect to charities the vast majority of the millions raised by demonstrators protesting in the Canadian capital, prominent US Republicans like Florida Gov. Ron DeSantis complained.

But GoFundMe had already changed its mind and said it would be issuing refunds to all. The site said it cut off funding for the organisers because it had determined the effort violated the site’s terms of service due to unlawful activity.

Ontario Premier Doug Ford has called it an occupation.

“For some senior American politicians, patriotism means renting a mob to put a G-7 capital under siege,” tweeted Gerald Butts, a former senior adviser to Trudeau.

In Canada’s largest city, Toronto, police controlled and later ended a much smaller protest by setting up road blocks and preventing any trucks or cars from getting near the provincial legislature. Police also moved in to clear a key intersection in the city.

Many Canadians have been outraged over the crude behaviour of the demonstrators. Some protesters set fireworks off on the grounds of the National War Memorial late Friday. A number have carried signs and flags with swastikas last weekend and compared vaccine mandates to fascism.

Protesters have said they won’t leave until all mandates and COVID-19 restrictions are gone. They are also calling for the removal of Trudeau’s government, though it is responsible for few of the measures, most of which were put in place by provincial governments.