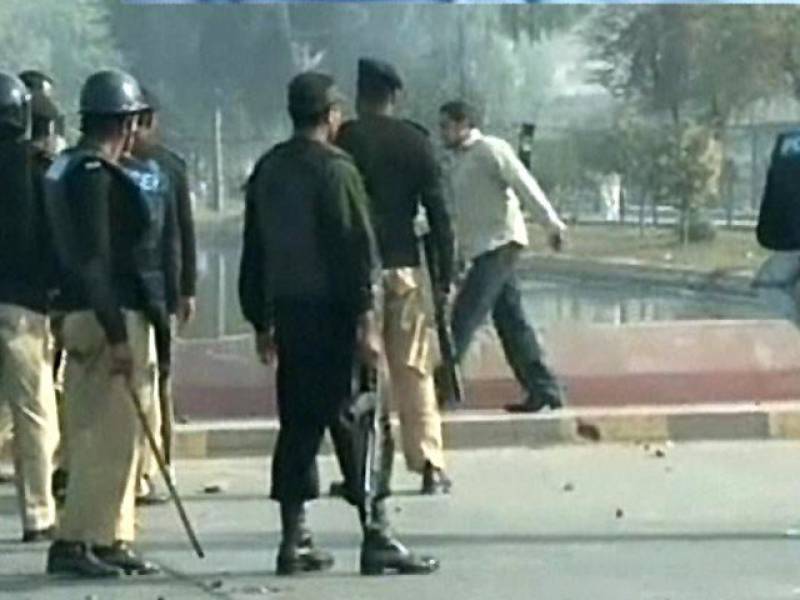 UPDATES: After eight hours of heavy shelling and aerial firing, police have managed to disperse the protesters and clear the National Highway.

KARACHI - Scores of people are feared injured after violent clashes erupted between police and protesters in Malir 15 area during a demonstration on Monday against the arrests of religious and political leaders in mega city.

The leaders, Allama Mirza Yousaf Hussain and Taj Hanfi were detained in the last two days over accusations of provocative speech.

The hearing of the case was held today after which Allama Mirza Yousaf Hussain was sent to jail.

At least nine suspects were arrested after the protest intensified.

TV footages showed police firing tear-gas shells at the protesters, who blocked traffic at the National Highway and stopped trains on their tracks.

The protesters also hurled stones on police personnel, wounding one official. They hauled heavy trailers to block Jinnah Avenue and obstructed the flow of traffic .

The protesters also tried to shut the railway track and halted the train operation.

Reacting to the tense situation, police resorted to aerial firing and heavy shelling to quell the protesters. The protesters dispersed into the nearby streets and are being followed by police for detention.

The clash turned violent after a process of negotiation failed as the protesters are demanding immediate release of their leaders.

Former senator of Pakistan People’s Party (PPP) Faisal Raza Abidi was arrested during an early morning raid at his Karachi residence on Saturday in connection with the killing of two men who belonged to the Tableeghi Jamaat in Patel Para area.

On the other hand, the Counter-Terrorism Department has detained five terrorists involved in the killings of six people.

The terrorists belonged to banned outfit and killed two members of Tableeghi Jamaat in Patel Para area, three workers of Ahle Sunnat Wal Jamaat (ASWJ) at Shafique Morr and an Imam in Nazimabad three days back.