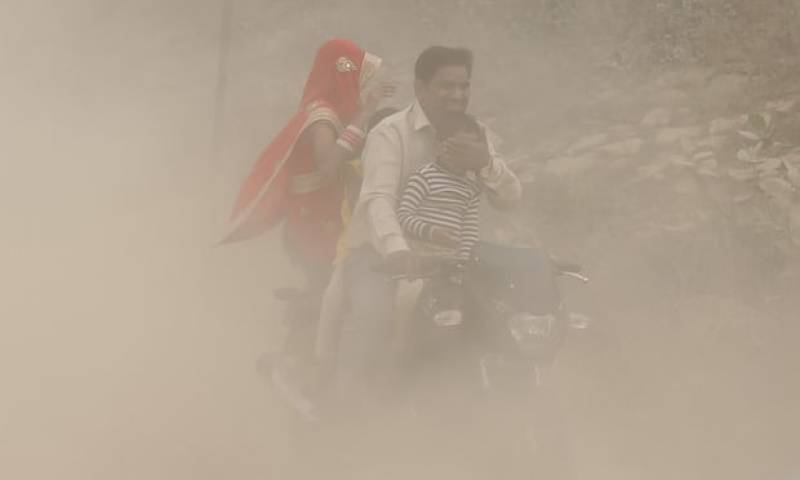 NEW DELHI - A public health emergency has been declared by doctors in Delhi on Tuesday as air quality in the world’s most polluted capital city plunged to levels likened to smoking at least 50 cigarettes in a single day.

The Indian Medical Association (IMA) declared "a state of medical emergency" and urged the government to "make every possible effort to curb this menace".

People have been posting dramatic pictures on social media showing the extent of the problem.

Slow winds and colder temperatures have been blamed for a surge in airborne pollutants beyond what instruments in the city could measure with some recording an Air Quality Index (AQI) maximum of 999.

The Indian Medical Association said the country’s capital was suffering a health emergency and called for an upcoming half-marathon to be cancelled to avoid “disastrous health consequences”.

Residents were warned to avoid leaving their homes as smog enveloped streets and landmarks on Tuesday, sparking road, rail and airport delays and renewed calls for Indian state and federal governments to act.

The Delhi chief minister, Arvind Kejriwal, said the city was a “gas chamber” as his government met on Tuesday afternoon to consider a response to the crisis. Primary schools, already asked to keep students indoors, will be shut on Wednesday and possibly longer if the poor conditions persist.

The chief minister of Delhi, Arvind Kejriwal, has asked his education minister to consider shutting down schools for a few days.

Delhi sees pollution levels soar in winter due to farmers in neighbouring Punjab and Haryana states burning stubble to clear their fields.

Activists say very little has been done to stop the practice despite Delhi facing severe pollution for a number of years.

The government enacted a plan in October to combat some of these problems.

The plan includes traffic restrictions and the shutdown of a major power plant. Last year car rationing was trialled in an attempt to curb pollution.

But none of the measure seem to have had much impact.

Some Twitter users believe that the problem needs a long-term solution instead of a "piecemeal approach".

Situation is getting worse with each passing day....Panic in the air, every breath is an effort... #smogindelhi #DelhiChokes

Haven't seen the sunrise in Delhi since past one week...which usually use to be the best part of the day !#DelhiChokes

The air pollution in DELHI is alarming and I hope someone is keen on doing something about it. Lives of little children are at risk and this is not the state of affairs we want them to be growing up in. Time for talk is over. Needs some effective action.

It’s almost impossible to breathe in Delhi today. Pollution is the only story that matters right now. https://t.co/o1jeP8VxbF

Colour of Delhi sky today.The Sun is out but you can barely see anything #delhipollution pic.twitter.com/CIvDNO71te

Welcoming the King & Queen of Belgium, now in #Delhi to commemorate Indians who fought in #Flanders, with an atmospheric recreation of WW1. pic.twitter.com/KUvksfOQdu