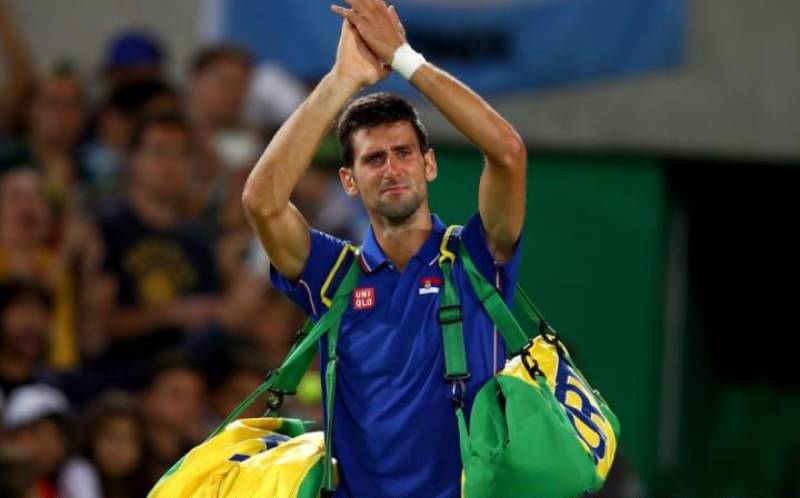 RIO DE JANEIRO (Web Desk) - World No.1 Novak Djokovic received biggest upset at the Olympic Tennis Centre on Sunday when he suffered an opening-round defeat for the first time since January 2009.

According to UK media reports, Djokovic was reduced to tears after suffering a shock first round 7-6(4) 7-6(2) loss to Argentina's Juan Martin del Potro in the men's Olympic tennis tournament.

Djokovic has dominated the men's game in recent years and had made it a priority to win an Olympic gold medal, the only major prize that still eludes him.

"No doubt this is one of the toughest losses in my life and in my career," a distraught he told reporters.

"It's not easy to handle, especially now, just after the wounds are still fresh."

After winning this year's Australian and French Open titles, Djokovic was the favourite to add Olympic gold to his 12 grand slam titles and Del Potro was as surprised as anyone to see the Serb go out.

"I didn't expect to beat Novak tonight," said the 2009 US Open champion, who has been battling a wrist injury for much of the season and is ranked 141st in the world.

"But I played an amazing match, my forehand worked great."

The 27-year-old Argentine crunched 29 forehand winners in comparison to just seven by Djokovic, who lost a bronze medal match to Del Porto at the London Olympics four years ago.

Del Potro, who was once ranked fourth highest in the world, said the performance against Djokovic gave him hope of fully overcoming his injury nightmare.

"I felt once again I had the capability to play against the best in the world," he said.

The two men, who are also friends, were both visibly emotional and shared a warm embrace over the net at the end of the game in which a raucous Brazilian crowd produced an electric atmosphere.

The Serb will get another chance to experience the Rio atmosphere when he teams up with Nenad Zimonjic to play Brazilian duo Marcelo Melo and Bruno Soares in a second round men's doubles match on Monday.

Djokovic will be 33 by the time of the Tokyo 2020 Games meaning the Rio men's doubles could be his best hope of achieving Olympic success.

Meanwhile, Del Potro, who found himself stuck in a malfunctioning lift earlier on Sunday, has blown the draw wide open and can look forward to a second round match with Joao Sousa of Portugal.