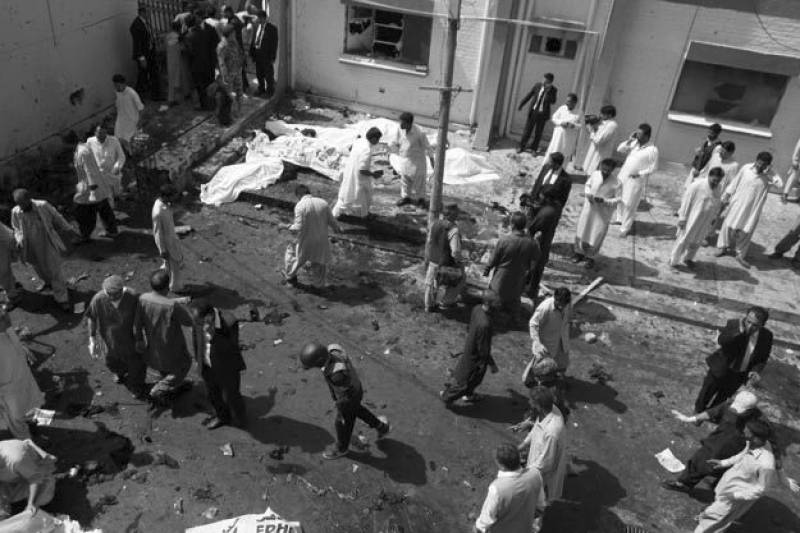 According to the eyewitnesses, the blast took place at the entry gate of the accidents section of the hospital soon after the dead body of slain lawyer leader Bilal Anwar Kasi was brought to the hospital. Gunshots were also fired after the bomb blast.

The law enforcement agencies and rescue teams immediately rushed to the blast site and shifted the injured to the hospital and Combine Military Hospital (CMH). A situation of emergency was invoked in the city.

Most of the dead and injured were lawyers who had arrived in the hospital after the early morning killing of Balochistan Bar Association (BBA) president Bilal Anwar Kasi.

None of the groups involved in terrorist activities in Balochistan province claimed responsibility for the blast immediately.

Following the blast, Balochistan Home Minister Sarfraz Bugti said that it was a matter of serious security lapse as there was no security alert for the hospital. I am monitoring the investigation personally, he said.

He went on to say that an investigation was underway to determine the nature of the blast, however, initial findings suggested that it was a suicide blast.

Earlier this day, the Balochistan Bar Association (BBA) president, Bilal Anwar Kasi, was gunned down in an apparent targeted killing incident in Quetta.

The police officials said that the car of the lawyer leaders came under attack on Manno Jan road in the city. The assailants were riding a motorbike and could not be identified immediately. Further investigation into the murder incident was still underway.

In his message, the Prime Minister directed the Ministry of Interior and the provincial government to hunt down the perpetrators of this brutal act.

In a similar incident in June this year, University Law College Quetta principal Barrister Amanullah Achakzai was also murdered when unidentified assailants targeted him in Quetta’s Spinny Road area. He was on his way to work when attacked.