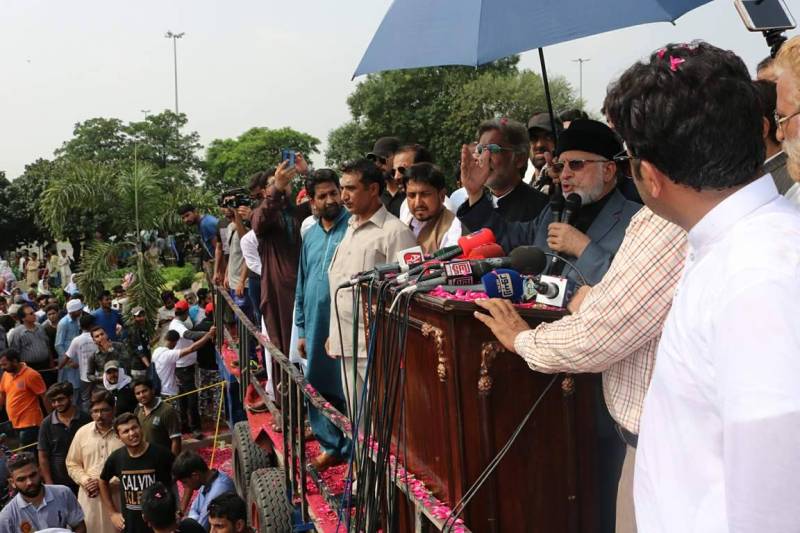 Addressing a huge rally at Nisar Bagh Lahore, after he landed in Pakistan from Doha, the PAT chief said the JIT that probed the offshore assets of Sharif family should investigate the massacre of PAT workers.

He also demanded the government bring to light the Justice Baqir Najfi report.

The religious scholar reiterated that the Sharif brothers were behind the June 14 incident that led to the martyrdom of 14 people back in 2014.

He expressed that the top court disqualified the prime minister of Pakistan Nawaz Sharif but the Sharif family should be thankful to Allah as they were not sent behind bars.

"Instead of confining themselves to homes, they are coming out on GT Road," he said and advised the ruling party to cancel their GT Road plans.

The PAT chief lamented the judicial system of the country taking the plea that as many as 126 people were summoned in the Model Town killings case but not a single accused was sent to jail.

He maintained that the same independent judiciary for which ruling party campaigned, announced the Panama verdict.

"You (Sharifs)lied before the Joint Investigation Team and submitted forged documents before the apex court," alleged Tahirul Qadri.

Qadri also asked former prime minister Nawaz Sharif to reveal the conspirators if there were any, behind his ouster.

He claimed that he enlightened the masses on the article 62, 63 which were implemented after four years.

"Democracy, in essence, means rule of law and protecting masses," noted the PAT supremo and added that the current rulers were political and ideological terrorists.

He alleged that the ruling party provided safe heavens to banned outfits and funded them as well.

He inquired the audience whether they were ready to not leave the place.

"Are you ready to stay here? Are you prepared for that? Have you got the resources?" he asked to which the audience replied "Yes, we were ready!"

However, Tahirul Qadri did not convert the rally to sit-in and announced that he would announce his next plans soon.

Qadri was accompanied by Pakistan Tehreek-e-Insaf's Shah Mehmood Qureshi and Chaudhry Sarwar, among other political leaders, including Awami Muslim League chief Sheikh Rasheed who addressed the rally before Qadri took the stage.