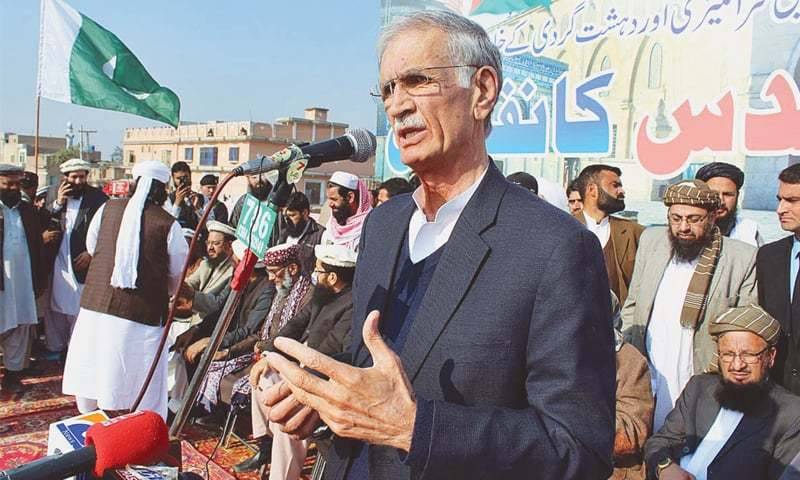 ISLAMABAD - Khyber Pakhtunkhwa Chief Minister Pervez Khattak addressed a public meeting of the Difa-i-Pakistan Council (DPC) on Sunday, stirring debate in the political corridors whether Pakistan Tehreek-e-Insaf would be fully entering into an alliance with the group having a majority of religious factions.

The conference 'Tahaffuz Baitul Muqaddas' was also addressed by Jamaatud Dawa (JuD) chief Hafiz Muhammad Saeed through telephone after reports emerged that the Punjab government stopped him from attending the conference.

In his address at the conference, Chief Minister Khattak said his government had focused on the social sector, including education and health and also continued its efforts to serve Islam.

"The KP government had made a chapter relating to the finality of Prophethood of Muhammad (peace be upon him) compulsory in textbooks as well as recitation and translation of the Holy Quran till grade 12 to produce good Muslims," Khattak observed.

Highlighting the efforts related to the religious sector by the provincial government, Khattak said the KP government had provided the solar system to mosques and fixed honorarium for prominent prayer leaders (Imam). He also attacked the liberal forces for interfering in religious matters.

In his telephonic address, Hafiz Saeed said the US, India and their allies were trying to create problems for Pakistan but hastened to add that India would never become a super power.

The gathering was also addressed by Maulana Samiul Haq, the chairman of the DPC who in his speech said US President Donald Trump had declared “war against Pakistan” by issuing threatening statements.

"The government would be responsible if America attacked Pakistan," warned Sami as he called for national cohesion.

He observed that transportation of equipment and goods meant for Nato forces in Afghanistan had badly damaged the country’s road infrastructure adding that after the defeat in Afghanistan, Pakistan will be the worst graveyard for Americans.

Samiul Haq, who is referred to as “Father of Taliban” continued that Jihad was compulsory for every Muslim in the current situation, adding that the DPC was formed to counter Christian and Jewish lobbies.

"Hafiz Saeed had been put under house arrest because he was a staunch supporter of the people of India-held Kashmir," noted the scholar.

The conference called upon the Muslim rulers to introduce an “Islamic currency”.

Maulana Fazal Rehman Khalil, Sheikh Rashid Ahmad and other leaders also addressed the conference where it was decided that the DPC would launch a countrywide movement to foil nefarious designs of Christian and Jewish lobbies against Pakistan.

When provincial Edu­cation Minister Muhammad Atif Khan was asked about the presence of Khattak in the gathering, he kept mum.

“I can’t comment on it, but it’s clear that the PTI is not a member of the DPC.” Atif Khan told Dawn News.

The KP government’s spokesman, Shah Farman, was not available for his comment on the matter.