Farmers' protest- what changes will ensue? 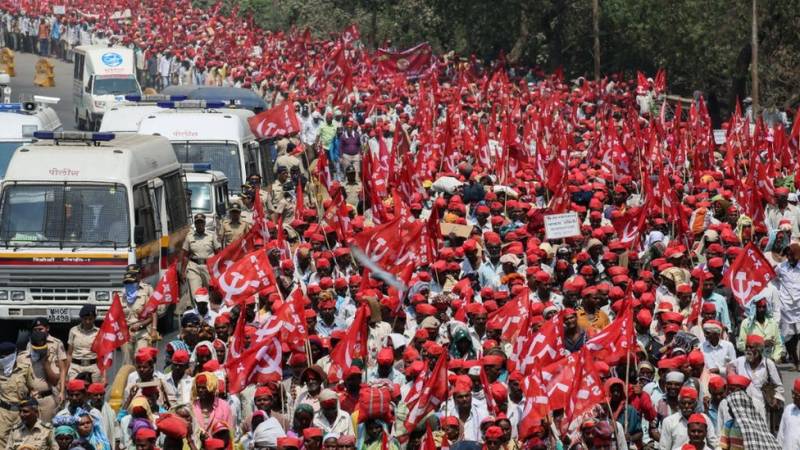 In 1907, the ‘Pagri Sambhal Jatta’ wave began in Lyallpur, now Faisalabad, and acquired the shape of a movement that took the whole Hindustan by storm. In March 1907, the British promulgated three acts - the first being ‘Do-Aab Bari Act’, the second ‘Punjab Colonization Act’, and the third ‘Land Alienation Act’.  Invariably, these acts were not acceptable to the farmers at any cost. The first dissenting voice was raised by Sardar Ajeet Singh from Lyallpur, who was Sardar Bhagat Singh’s uncle. Later, people like Lala Lajpat also became part of this movement.

It was the force of this movement and the resistance of the ‘Ghadri Babas’ that produced thousands of youngsters like Bhagat Singh. History of the land changed, and in 1947 the British went back to Britain. Unfortunately, however, this did not grant independence to the natives from the ‘Brown Sahabs’. In this way, the basic right of every citizen, labourer and farmer was forfeited.

The return of Modi Sarkar into power for the second time in India has the backing of the same capitalist ‘Brown Sahabs’ who not only control the major chunk of Indian wealth but very well know how to use RSS to enhance it. And this is the reason why the secular India of Mahatma Gandhi has fallen prey to the worst kind of religious extremism.

Around six months ago, three bills against farmers were passed through Narendra Modi. As a result, the farmers began registering their protests to repeal the bills, but the government delayed and denied their demands on flimsy grounds. Eventually, protests broke out in many cities. Threats of greater demonstrations were escalating, but the government did not budge an inch. The deadline of 26th November 2020 was given, but hardcore capitalists like Ambani and Aidani signalled Modi to hold his ground.

On 26th November, farmers from all over Punjab started heading towards Delhi on their tractors and trolleys. The very next day, thousands of farmers gathered at Sanghu near the Delhi border. Following the footsteps of the Punjabi farmers, the agrarians of Haryana also started marching towards Delhi in demand of their rights.

The corporate mindset thought that these protests would last for only a few days, and the dejected and defeated farmers would return home after this fiasco. It is only, for this reason, that though the Indian government has had six rounds of talks with the farmers, yet the government is deliberately procrastinating and fiddling around.

Little does it know that this time it was confronted with the Punjabi nation, which has learnt to give out by the “20 rupees true bargain” philosophy of Baba Guru Nanak, and to fight by dozens of characters like Guru Gobind Singh, Dulla Bhatti, Rai Ahmed Khan Kharal, Mahraja Ranjeet Singh and Bhagat Singh – the ones who were galvanized and exhilarated by the thought of sacrifice and martyrdom.

If you have ever been to a ‘Gurdwara’, you surely would have tasted the inexhaustible ‘langar’. Today, the 20 Km long Sanghu border, has become a big bazaar and subsequently taken the form of a gurdwara. The capitalist mindset is dumbstruck regarding the source of the unlimited supply of clothes, tents, gas cylinders, eatables, generators, solar panels and other essentials including medical care. The truth is that the ones giving Guru Nanak’s ‘daswant’ (one-tenth of his wealth/earnings) are far more in number as compared to the ones receiving it.

On top of that, all of this is supplemented by the Sikh community living abroad, which includes dozens of organizations like Khalsa Aid, International Punjabi Foundation, Global Punjabi Sath, United Sikh and Akaal, which are scattered around the globe, including Europe.

By the benediction of Baba Guru Nanak’s philosophy of “20 rupees سچا سودا true bargain”, it appears that collecting funds equivalent to any large country’s budget is a child’s play for the Punjabi Sikhs. The Punjabi Kisaan is well aware that if the heinous motives of the corporate world are materialised this time, it would tighten the noose around their necks within a decade.

One may call it merely a protest of the farmers, but on closer inspection and in-depth analysis, this movement is not only about to change the face of India but also have a deep impact on the rest of the world, including Pakistan.

For about a month and a half, thousands of farmers are battling against many odds including harsh weather, but not the slightest speck of violence is to be seen. Farmers from around the world are learning the philosophy of love for their homeland. The future of agriculture seems to be getting brighter, and the deadly grip of corporate companies appears to be losing its strength.

Seventy-three (73) years ago, the Punjab that was divided by religious extremism, and became an altar for 20 Lac people, is now shifting towards Bullay Shah’s vision of religious tolerance, where Baba Guru Nanak’s joint philosophy is paving the way for a golden land of peace, love and brotherhood. The Punjabi narrative is flourishing throughout the world.  In this era of social media awareness, the Pakistani farmer has the chance to witness and evaluate such occurrences. The voice of the farmer is echoing loud and strong, and the treachery of the mighty is withering away.

The new and modern face of 1907’s ‘Pagri Sambhal Jatta’ movement can not only be seen through the unity and togetherness of the farmers but the unison of the thousands of Punjabi ‘jawans’ in the form of ‘Lakha Sadhna’ – the jawans who witness 20,000 suicides in a year’s time.

This jawan is now fully aware of the state’s hidden agenda of buying 20 rupees/kilo of potatoes from the farmers, and shrewdly selling them for 200 rupees under its own chips brand, and vending the water extracted from the farmers’ land in the name of mineral water, at a price more expensive than milk. Even after being aware of all these mala fide intentions, when the jawan sings ‘Assi jaaye dharat Punjab day, ankhaan day beli’, the whole world seems to change – a change which is inevitable and predestined.

The writer is a social activist and President Punjabi Parchar, an organization working for the promotion of language and culture. He can be reached at ahmedraza571@gmail.com.