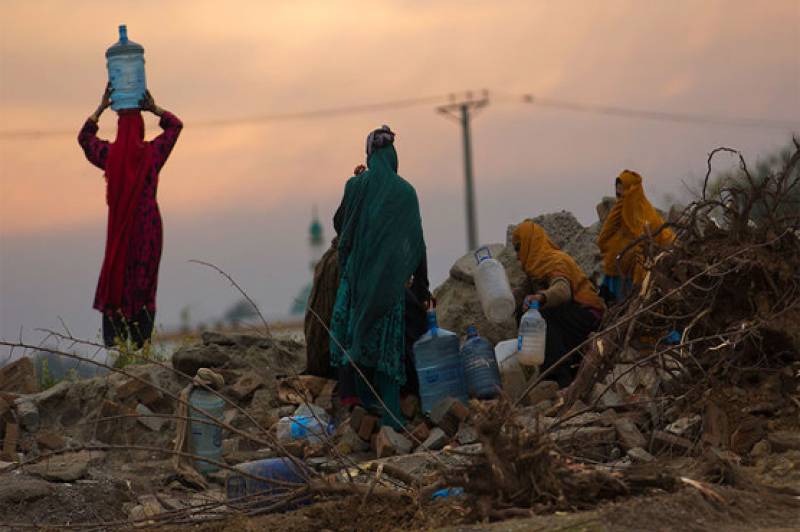 The depleting level of groundwater in the country is likely to set alarm bells ringing in the power corridors for the newly elected government which is already facing massive economic turmoil.

Owing to the lurking water crises, the World Bank and the Asian Development Bank (ADB) have placed Pakistan in the red zone, categorizing it as a water-stressed country which is likely to battle an acute water shortage over the next five years due to the lack of water availability for irrigation, industry and human consumption. If the same trend prevails, it is likely that groundwater table will nosedive further and consequently per capita availability will reach 800 cubic metres by the next year.

According to Punjab irrigation department - Pakistan’s important government entity that monitors the level and quality of water before 1947 - the water table is plummeting 3 feet per year. Quoting the example of the most urbanised and densely populated city of Pakistan, Lahore, it said that 20 years backwater was extracted at 20 or 40 feet depth but now drilling has to be done at 800 feet to acquire the water.

Multiple factors are behind the water crisis e.g. unchecked installation of tube wells aggravated the situation.  Moreover, as per estimates, there is a continuous increase in the development of groundwater irrigation by tube wells. In Pakistan, the numbers of public and private tube wells installed (as per the source of Economic survey of Pakistan) in 2000-01 were 659,278 while in 2012-13 the amount of tube wells skyrocketed to 1175,073.  With this phenomenon, the annual extraction of water has swelled up to 51 million-acre feet of water.

Irrigation Research Institute (IRI) deputy director Dr Muhammad Javed said that multiple reasons accounted for the water depletion. “One of the major ones is over-extraction or over-pumping of groundwater. Water is being sucked out but recharge system that refills the groundwater is either not in place or mismanaged. Total discharge (withdrawal) of groundwater is at 37 Million Acres Feet (MAF) against recharge (refilling) at 30 MAF, he added and said that it depicts a massive gap between discharge and recharge system.

Second vital cause of water scarcity is poor planning to store water. Pakistan has established only 3 dams and scores of small barrages as compared to China having 22,000 and India 4,200 small and big dams. “Pakistan’s storage capacity is just for 30 days, whereas India has the ability to store water for 120-220 days,” Water and Power Development Authority Engineer Dr Rahim Buksh responded to a query. Meanwhile, Egypt has 1,000 days water storage capacity only on River Nile, America 900 days on River Colorado; Australia 600 and South Africa has the ability to store water for 500 days on River Orange.

“The per capita storage capacity in the United States stands at 6,150 cubic metres, in Australia 5,000 cubic metres but in Pakistan, it is just 132 cubic metres that show how vulnerable 180 million Pakistanis are to water availability,” he went on saying.

Sedimentation is also adding to the existing crisis. According to WAPDA documents, Pakistan has also lost its capacity to store water by 27 percent (4.37 million feet of water) from 16.28 MAF to 11.91 MAF because of sedimentation, as 4.99 MAF gets stored in the Mangla Dam alone. Tarbela Dam was built in 1974 with the storage capacity of 9.69 MAF, which reduced in 2011 by 31 percent (3.02 MAF) to 6.77 MAF. Mangla Dam that was established in 1967 with the capacity to store 5.87 million acres feet of water has witnessed a reduction in its storage capacity by 15 percent (0.88MAF) to 4.99 MAF. Likewise, Chashma barrage was erected in 1971 with the ability to store 0.72 MAF water but owing to the sedimentation, its storage capacity has dwindled by 65 percent (0.47MAF) to just 0.25MAF.

The document also predicts that Pakistan will lose further on water storage capacity by up to 37 percent (5.95MAF) in 2025 if water managers of the country don’t prioritize the policies and build dams on Pakistan rivers. “It is more unfortunate that the top political leadership and establishment are not paying heed towards improving the water storage capacity of the country,” Mr Buksh added.

Director Rana Muhammad Iqbal at Directorate of Land Reclamation - part of Irrigation Department of Punjab, considered custodian of water - strongly recommended the construction of Kalabagh dam as the sole solution to resolve water storage and its infringe benefits in terms of rising groundwater table in Pakistan.

He said that cropping intensity was also another factor playing its role in the drastic reduction of water table. “Earlier cropping intensity was 66 percent which means that we cultivate crop one time a year and farmer needed average water to irrigate lands. Now cropping intensity rose up to 150 to 200 percent showing the fact that in one year more than 3 or 4 crops are cultivated and to meet the growing demand of water, excessive water has to be extracted,” he added.   In Pakistan’s Punjab, more than 50% of crop water requirement comes from groundwater, producing the majority of food in the country. If irrigated lands suffer water shortage, Pakistan will have to face massive food insecurity.

The most crucial reason for decrease in water table is absence of legislative oversight. Groundwater makes up 55 percent and surface water accounts for 45 percent of total water. It is an astonishing fact that there are a lot of rules and regulations for surface water but to regulate groundwater, no law exists. None of the successive governments bothered to evolve even a basic infrastructure for groundwater, Environment department official Nasim Shah said.

Over-extraction of groundwater has caused swift depletion of an aquifer which has raised alarming levels of bacterial contamination. Though the surface water is available, due to ill planning and mismanagement the cheaper sources of surface water. There is a dire need of switching from groundwater to surface water, now with realization; Pakistan has been blessed with an abundance of availability of surface and groundwater resources to the tune of 128300 million m3 and 50579 million m3 per year respectively (The Pakistan National Conservation Strategy,).

Currently, over 45 percent of Pakistan’s population does not have access to safe drinking water. Since the quality of drinking water supply is poor, with bacterial contamination, arsenic, fluoride and nitrate, incidents of water-borne diseases are increasing rapidly, Director Pakistan Council of Research in Water Resources (PCRWR) Lubna Naheed revealed. High population growth rate, urbanization, industrialization and new environmental constraints are aggravating the problem, she said.

Ministry of water and power report (2011-2012) pinpointed that in Pakistan, water was excessively wasted at houses, offices, markets and factories. Fresh and drinking water is used for washing, gardening and other non-drinkable purposes. “Besides wastage, burgeoning population, climate change, lack of water reservoirs and manipulation of Jhelum and Chenab rivers by India are other key factors squeezing water availability in Pakistan,” the report claimed.

The Wapda official also said that in 2010-11, around 54.5MAF water ended up in the sea, which confirms the need for the erection of huge dams on the River Indus. “The government needs to become proactive for the time required financial releases, he said, adding Wapda had placed the demand of releasing Rs100 billion for 35 water projects but it has been committed only Rs24.120 billion. This is the main reason that Wapda has failed to increase the water availability in the country, he said.

On the eve of the World Water Day to highlight significance of water resources and the challenges faced by the water sector in Pakistan, the Engineers Institution Pakistan (IEP) in collaboration with the Water and Power Development Authority (WAPDA) and the Institute of Electrical and Electronics Engineers Pakistan (IEEEP) organised a seminar at WAPDA House. The seminar was chaired by WAPDA Member (Water) Hasnain Afzal. The WAPDA member said that the situation could only be improved by increasing water storage capacity in the country.

Groundwater Monitoring and Management Cell, irrigation department Punjab, supervisor Tariq Yamin said that department was engaging a foreign qualified consultant to devise a mechanism and design a practical model to regulate the groundwater. It will highlight the pressing problems with pragmatic solutions. “We have already developed Term of Reference in this regard. GIS cell will give its inputs in making framework. We have also started outlining the legislation to check water depletion. After completing the paperwork, it will be sent to Punjab assembly and soon first law to regulate groundwater will take its course. Department has installed a number of instruments to analyse level and quality of groundwater even with meagre resources and manpower as our aim is to serve the people to hold water,” he added

The world overdraws 200 km3 of its global groundwater 'bank account' every year. Probably more than 20% of this overdraft occurs in Pakistan, placing this country's food and livelihood security at massive risk. And if the situation continues, the destiny of Pakistan will certainly be none other than drought, hunger, poverty and darkness as the key to prosperity lies in building new reservoirs in the country.