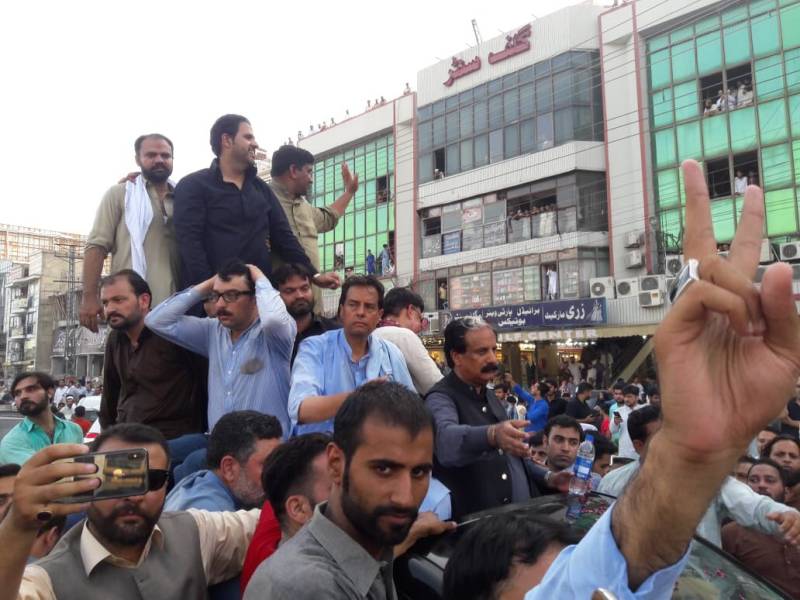 Dozens of PML-N workers surrounded Capt (r) Safdar after he was taken into custody by the NAB's team.

The NAB officials said on the occasion of arrest that Safdar would be shifted to Bureau's office in Islamabad, adding that they would shift the convict to Adyala jail after getting remand from court.

The Pakistan Muslim League-Nawaz (PML-N) leader, who has been convicted in a corruption case pertaining to upscale London properties of Sharif family for abetment, had been on the run since the verdict in Avenfield reference was out on Friday.

On Saturday night, the NAB team raided Safdar's house in Mansehra as he refused to surrender in his hometown.

Earlier yesterday, the anti-corruption watchdog obtained the arrest warrant and fielded its three teams in Haripur, Abbottabad, and Mansehra to arrest Mr Safdar.

On Friday, an accountability court sentenced Capt (r) Safdar to one year in jail for cheating while announcing the verdict in a corruption reference pertaining to Sharif family’s Avenfield apartment in London, UK.

Judge Muhammad Bashir also handed a 10-year sentence and £8 million (Rs1.29 billion) to Nawaz Sharif. He also sentenced Sharif’s daughter, Maryam Nawaz, to seven years in jail for forgery and making assets through illegal sources in the landmark decision. She has been ordered to pay a fine of £2 million (Rs320 million).

The three convicts were given one-year jail term, which will run concurrently, for not cooperating with the bureau during the probe into the case. In the light of this verdict, both Maryam and her spouse cannot contest elections, while Sharif has already been disqualified for life by the Supreme Court in Panamagate case.

The court also ordered forfeiture of their property in the Avenfield Apartments, Park Lane, London.

Following the verdict, the NAB has also obtained arrest warrants of former prime minister Nawaz Sharif and his daughter Maryam. NAB sources revealed that the former premier and his daughter will be arrested upon arrival to Pakistan from London.

Muhammad Sajjad, brother of Safdar, said that his brother was in consultation with his lawyer to obtain pre-arrest bail by challenging the verdict in the high court.

Safdar’s name has been included in blacklist on Saturday as was feared to flee the country, the anti-corruption watchdog said.

The Maryam’s husband, who was in the run for elections from NA-14 constituency, could not take part in elections as the accountability court has barred him and his spouse from contesting polls for ten years.