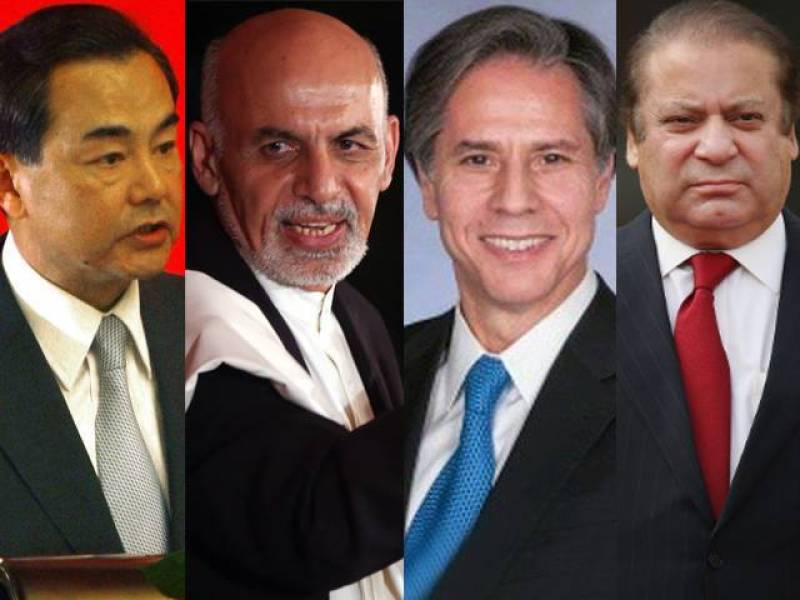 The Pakistani and Afghan delegations were led by Prime Minister Nawaz Sharif and President Ashraf Ghani respectively while Deputy Secretary State Tony Bliken was leading the US delegation in the meeting. Chinese Foreign Minister Wang Yi represented his country in the meeting.

The meeting was started after  a brief dialogue between Prime Minister Nawaz Sharif and President Ashraf Ghani in which they took up several issues of mutual interest including the resumption of talks with Afghan Taliban.

The trip is followed by a trilateral meeting of Prime Minister Nawaz Sharif, President Ashraf Ghani and Prime Minister David Cameron, where the three countries agreed on cooperation based regional relationship.

Ashraf Ghani gave a green signal to meet Nawaz Sharif in Paris during a visit of Pakistani delegation which included Awami National Party (ANP) chief Asfandyar Wali Khan and Qaumi Watan Party’s (QWP) Aftab Khan Sherpao. Afghan President had however maintained that Kabul will not compromise its sovereignty and independence to take decisions at any cast.

A same request of meeting was made through UK Prime Minister David Cameron, but Ashraf Ghani refused to meet Pakistani side until it gives up ‘hatching conspiracies’ against Kabul.

The relationship between two countries was badly damaged when Ashraf Ghani blamed Pakistan for supporting the Afghan Taliban in carrying out suicide blastsin Kabul.

Ghani’s statement was further followed by Islamabad’s accusation that an attack on PAF Badaber base was planned and controlled from Afghanistan.

The governments of Pakistan and Afghanistan have been communicating through ‘backdoor channels’ to get the ties back on track.

However the Afghan side showed reluctance towards taking any measurement in this regard dismissing the requests of meetings from top Pakistani leadership.

Earlier this day addressing the Heart of Asia-Istanbul Process the leaders reiterated that the conference is one of many effective initiatives for stabilisation of Afghanistan and strengthening mutualcooperation of regional countries for peace and development.

The Heart of Asia-Istanbul Process was established in 2011 at the initiative of Afghanistan and Turkey.

The main objective of the Process is to foster efforts for regional cooperation and connectivity with a view to promoting long-term peace and stability as well as progress and development in Afghanistan, and the region.