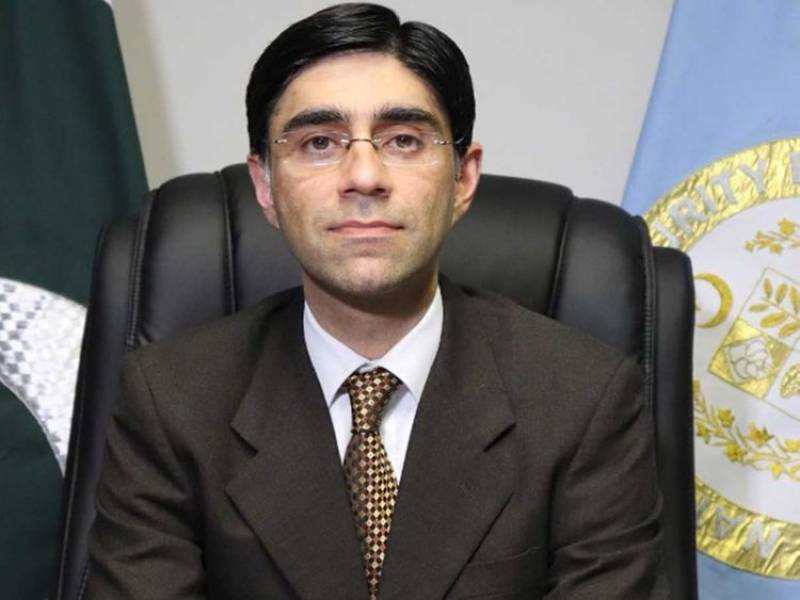 ISLAMABAD – National Security Adviser (NSA) Moeed Yusuf has said Pakistan did not aid and abet anyone in Afghanistan and termed the policy employed by the US and others in the war-torn country as a failure.

Speaking to BBC’s Stephen Sackur on HARDtalk, Moeed reminded the host that Pakistan was the only country that had repeatedly stated that there was no military solution to the Afghan issue.

“Our advice was not heeded. We kept saying to negotiate from a position of strength and we weren’t listened to. We are blamed and scapegoated. The results are in front of you. The facts should be for what they are,” Moeed added.

He said Afghanistan was heading to a new disaster. He appealed to the world for humanitarian aid for the people of Afghanistan.

“If there is a government of people who fought against America and other Western countries, there are also 35 to 40 million people who have nothing to do with it,” he said.

Answering a question about whether Pakistan’s security has been enhanced or diminished since the Taliban takeover of Afghanistan, the NSA said it depended on how the international community played its role in the future in regards to the region.

My conversation with @BBCHARDtalk on key issues like Afghanistan, US-Pakistan relations, our relations with China and future of the region. pic.twitter.com/Shr4CeTyqT

When Moeed was asked about the incumbent government’s negotiations with the banned Tehreek-e-Taliban Pakistan (TTP), the host also referred to the recent proceedings in the Supreme Court of Pakistan during which Prime Minister Imran Khan was questioned over the government’s ongoing talks with the militant outfit.

Moeed stated that all stakeholders needed to be taken into confidence. “There are parents who lost children, brothers who lost their sisters, sons who lost their fathers. There are problems with the tribes because they were wiped out.”

“We have a consistent policy as a state that negotiations must happen from a position of strength. This is what we told the US and others for 20 years for Afghanistan and I wish they would have listened. The TTP was getting its support from India and Afghan intelligence and that lifeline is gone.”

“They co-existed with the Afghan Taliban as they had contacts. We are in the position of strength because we know that they are reeling at this moment. What we are saying is that, if they (TTP), are willing to go through the due process of the law in the courts of Pakistan, live according to the Constitution of Pakistan, get punished for whatever crimes they committed, renounce violence forever (then), we want to hear what they want to say,” he added.

Click the link to listen to the entire podcast. https://t.co/Oz2fmzmeIJ

The adviser also rebuffed the news reports regarding the release of some TTP prisoners as part of the recent ceasefire agreement with the federal government.

“Pakistan has not offered any military bases to China in Gwadar, Balochistan,” clarified Moeed.

However, Dr Yusuf said there are economic bases of China in Pakistan, where any country in the world can invest, adding that “the same were also offered to the United States, Russia and the Middle East.”

Yusuf delved into Pakistan’s ties with China, saying that Beijing is a close friend of Islamabad. He once again reiterated that any country in the world can invest in the China-Pakistan Economic Corridor (CPEC) project since “we are not closed to anybody.”

Sackur asked Yusuf whether Pakistan had developed close ties with China at the cost of raising its voice for Muslims around the world, particularly those in Xinjiang.

“You raise your voice for Kashmiri Muslims but refuse to condemn the violation of human rights in a Chinese province,” he asked Yusuf.

The NSA responded by telling the interviewer that Pakistan does not agree with the Western version of the alleged atrocities being committed against Muslims in Xinjiang.

When the topic of discussion turned towards Kashmir, Yusuf said Pakistan will raise its voice for the oppressed since they were a part of Pakistan and not a foreign country.

PESHAWAR – Pakistan has reportedly released dozens of members of the Tehreek-e Taliban Pakistan (TTP) amid ...