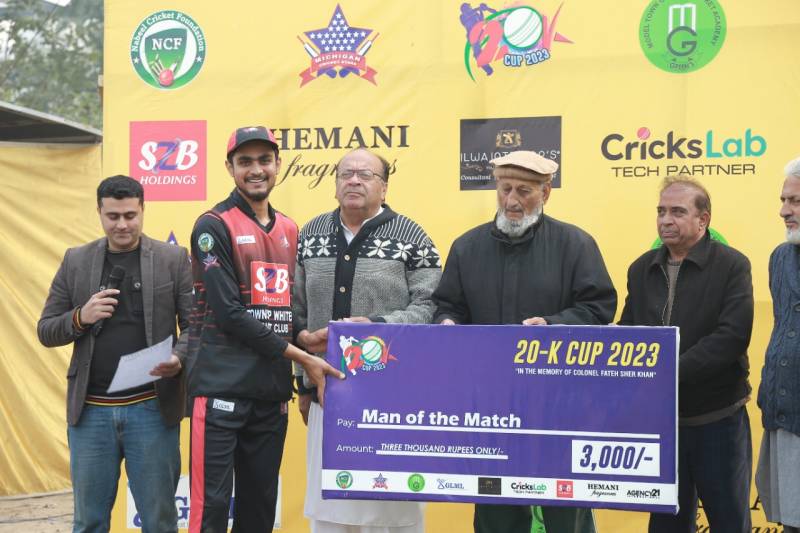 Basit Ali batted Cricket Center Club to a 26-run victory over Model Town Whites in the sixth match of the tournament. Basit Ali’s unbeaten convincing knock of 50 runs of just 24 balls was the highlight of the match and for this brilliant knock, he was awarded man of the match award.

Cricket Center, batting first, posted a decent total of 178-5 in the allotted 20 overs. Anas Mehmood was though the top scorer from the winning team as he scored 54 runs off 42 balls with the help of 6 boundaries and 1 sis, yet the star batter from the winning side was Basit Ali with his smashing unbeaten knock of 50 runs while opener Ameer Hamza struck 22 runs. Naveed Malik (4-20) and Shahab Khan (1-40) bowled well for MT Whites.

Model Town Whites replied strongly but their middle order failed to deliver as they could score 152-6 in 20 overs, thus losing the match by 26 runs. Opener Aon Shahzad played brilliant inning of 69 runs while Naveed Malik scored 25 and Farhan Khan hit 16 runs. For Cricket Center, Ali Zafar took two wickets and Saif ur Rehman and Asif Ali Khan got one wicket each.

Lucky Star Club could score paltry 81-10 in 12.2 overs, thanks to outstanding bowling by man of the match Muhammad Shoaib. Junaid Ali (25), Awais Shahzad (20), Imran Dogar (15) and Hanan Zahid (11) could cross the double figures. Besides Shoaib, Kamran Afzal and Muhammad Yasin claimed 2 wickets each.

On Tuesday (January 10, 2023), two matches will be contested. Shinning Club will vie against Shah Kamal Club while Apollo Club will play against Shah Faisal Club.