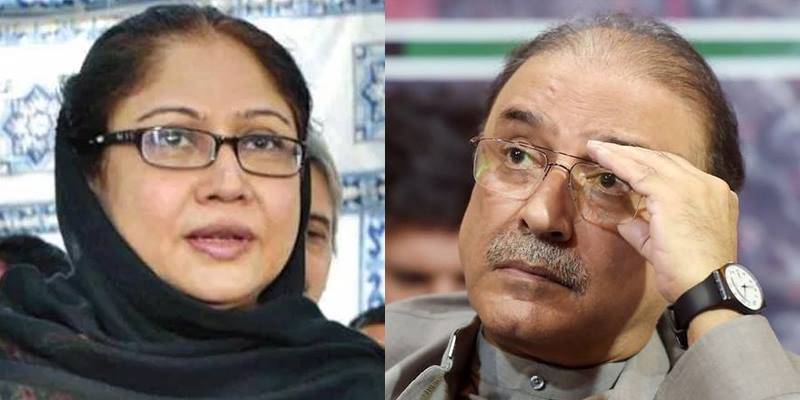 Rejecting reports pertaining to the siblings being placed on a “stop list”, Interior Minister Azam Khan denied the existence of any such register, saying there is no stop list, as he concluded a standing committee on interior affairs.

Earlier, the local media reported that the Federal Investigation Agency (FIA) had imposed travel restriction on former president Asif Ali Zardari, his sister Faryal Talpur and other after the apex court ruling in the fake accounts case.

Local media reports claimed that names of Pakistan Peoples Party leaders, Naseer Abdullahd, head of a private bank, Anwar Majeed, a close aide of Zardari, and five others have been put on a temporary Stop List, which is maintained alongside the Exit Control List (ECL) to bar 'wanted criminal' persons from fleeing the country.

A final decision to put their names on the ECL will be taken after the approval of an FIA's committee, it was said.

The apex court directed the names of the people mentioned in a list compiled by the Federal Investigation Agency (FIA), should be put on the no-fly list.

The Pakistan Stock Exchange chairman and a close friend of former president Asif Zardari, Hussain Lawai, was taken into custody on Friday. A local magistrate sent him on remand until July 11.

ISLAMABAD - The Supreme Court ordered on Saturday the Ministry of Interior to place the names of suspects involved in ...

The FIA grilled Lawai over his alleged involvement in the money-laundering scam involving billions of rupees. Lawai was summoned for investigation by FIA banking circle on Friday morning.

According to FIA sources, Lawai is accused of operating more than two dozen benami accounts to launder billions of rupees abroad.

Twenty-nine accounts belonging to seven people have been used to launder around Rs35 billion in Sindh, according to the FIA, which is being called the ‘biggest money laundering case in Sindh’.

The amount is black money gathered from various kickbacks, commissions and bribes. But despite these huge transactions, the bank authorities never reported to the authorities concerned including FIA.