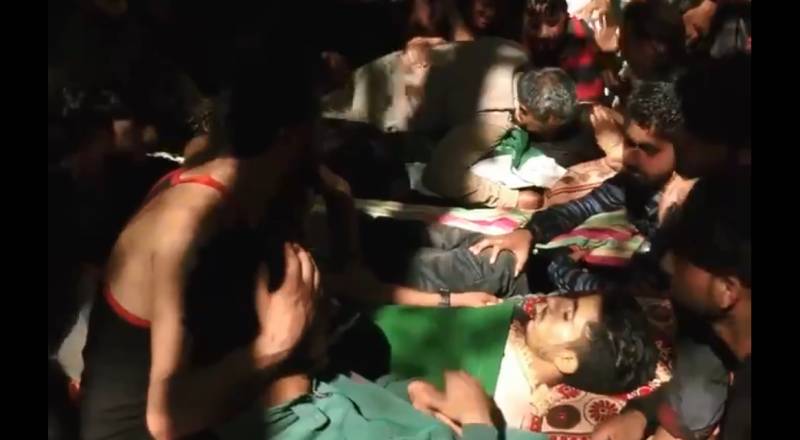 SRINAGAR - Emotional scenes have taken place at the funeral prayers of three Kashmiri civilians killed by Indian forces in Kulgam district on Saturday.

A number of people gathered in the district to pay their respects to the martyrs whose bodies have been wrapped in Pakistani flag.

The participants teared up when the aggrieved father of a slain girl started hugging and kissing her daughter's body while crying when she was taken to the graveyard for burial, shows a video shared on the social media.

A boy, in the video, can also be seen patting the hairs of his martyred brother.

Emotional scenes at the #funeral of civilians killed after #army fired at protesters on Saturday in south #Kashmir’s kulgam.#Father’s last good bye to her slain #daughter - he is hugging and kissing her and #Brother affectionately pats the hair of his slain brother. pic.twitter.com/TcpdVvyRgs

On Saturday, three civilians were killed in firing by Indian security forces in Occupied Jammu and Kashmir's Kulgam district.

Clashes broke out between protesters and security forces in Hawoora Mishipora village in Qoimoh area of the district in south Kashmir as a cordon and search operation was launched.

Besides the three fatalities, some protesters were also injured in these clashes.

Indian troops martyred one more youth during a fresh act of state terrorism in Kupwara district, on Monday.

Indian Army Spokesperson R K Panday confirmed that the operation in the area was under progress.