Leaked video of Kashmala Tariq harassing journalists in her office, ordering them to be "locked up" and "arrested" 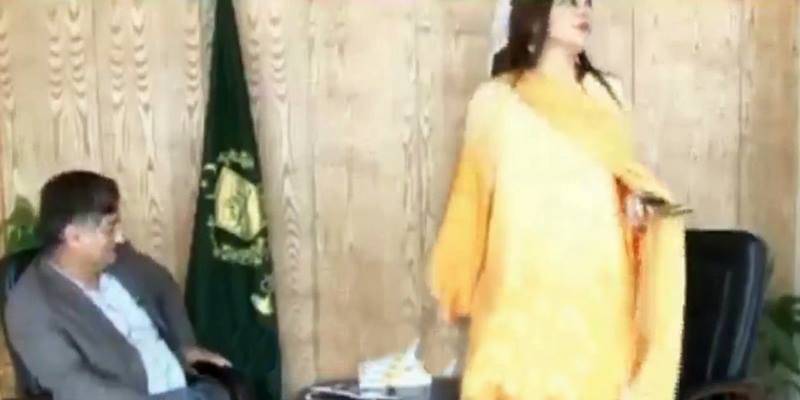 ISLAMABAD - A footage of Waqt News' squabble with the staff of Federal Ombudsperson inside its Islamabad office, has been released showing Kashmala Tariq visibly harassing the journalists assembled for her interview.

In the short clip that was released on Thursday, the newly appointed  federal ombudsperson on protection against harassment of women at workplace, Kashmala Tariq could be heard directing her staff to look up and arrest the newsmen.

'No one would be allowed to leave this place. Lock the doors and arrest him' said Kashmala as she stood up amid the interview on International Women's Day.

After the interruption, stirred by Kashmala herself, the newsmen were asked to hand over the footage of the interview, in a threatening tone.

Revealing his side of the story as to what perturbed the former legislator, Matiullah Jan expressed that he had only questioned his credentials for the post she got appointed to.

"I have contacted the police and 15 as well to lodge the complaint," said the Waqt News anchor, who was restrained from leaving the federal ombudsperson office for hours on Thursday.

ISLAMABAD - A group of working journalists associated with Waqt News including one of its renowned anchors Matiullah ...

Nawa-i-Waqt Group Editor Rameeza Nizami, had claimed that the interview was presented to Kashmala Tariq for review, even then she ordered the team that it ‘will not leave with the footage’.

Decrying how the people in power abhor being questioned, Rameeza Nizami claimed that even after two hours, the Waqt News crew was not allowed to leave the office.