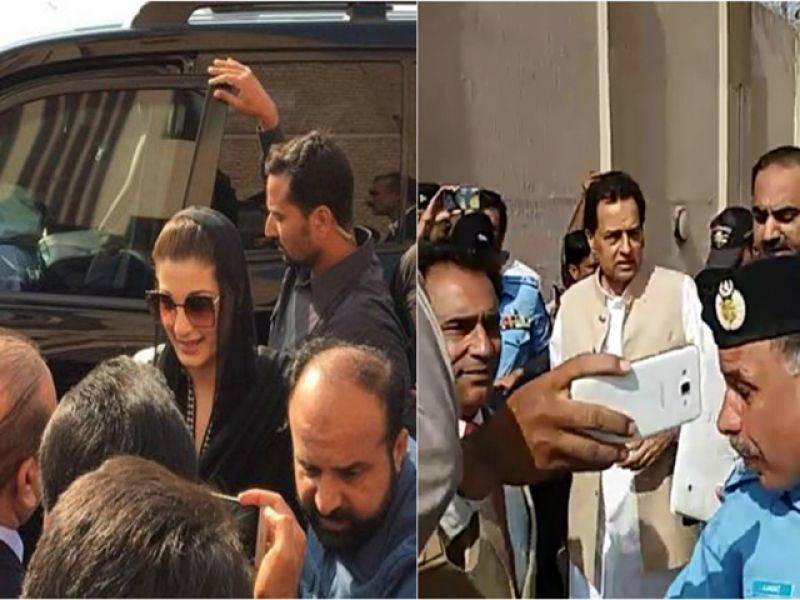 ISLAMABAD - Maryam Nawaz and her husband Captain (retd) Safdar appeared before the accountability court for the first time in a reference filed by the NAB regarding Avenfield apartments in London.

During the hearing, PML-N leader Tariq Fazal submitted surety bond worth Rs5 million to the court on behalf of Maryam to ensure her appearance. On which, the court granted her bail and provided copies of reference.

Later, the NAB authorities presented Captain Safdar along with a report regarding implementation of arrest warrants for him. Safdar also got bail from court after he submitted surety bonds worth Rs5 million.

The court had also summoned Nawaz, and both his sons today, but they skipped the hearing as they are in London tending to ailing Kulsoom Nawaz.

Meanwhile, the judge reserved a verdict in a plea filed by Nawaz Sharif's counsel seeking exemption from personal appearance for his client.

While presenting arguments, the NAB prosecutor opposed the exemption plea, adding that the court should issue non-bailable arrest warrants for the former premier for leaving the country without informing the authorities. He said that delaying tactics were being used by Sharif family.

The counsel for Nawaz said that his client wanted to appear before the court but he has to go to London as his wife's health condition had deteriorated.

Ahead of their appearance, strict security measures have been taken, while the security of the judicial complex is being handled by the Islamabad police.

A large number for female supporters of Pakistan Muslim League-Nawaz (PML-N) and other workers have reached the court to welcome their leader. The party workers are chanting slogans in favour of their leaders.

In order to handle any untoward situation, a contingent of strike force comprising 150 troops has been deployed at the judicial complex, while a water canon also present there.

According to sources, the court would not indicted them as charges cannot be framed if all accused are not present.

The National Accountability Bureau (NAB) took Captain (retd) Mohammed Safdar in its custody after he along with Maryam landed at the Benazir Bhutto International Airport late Sunday night. However, Maryam headed to her house from the airport as she was not arrested.

The accountability court had issued non-bailable arrest warrants for Safdar and other members of the family, including Hussain and Hassan Nawaz after they failed to appear despite summons.