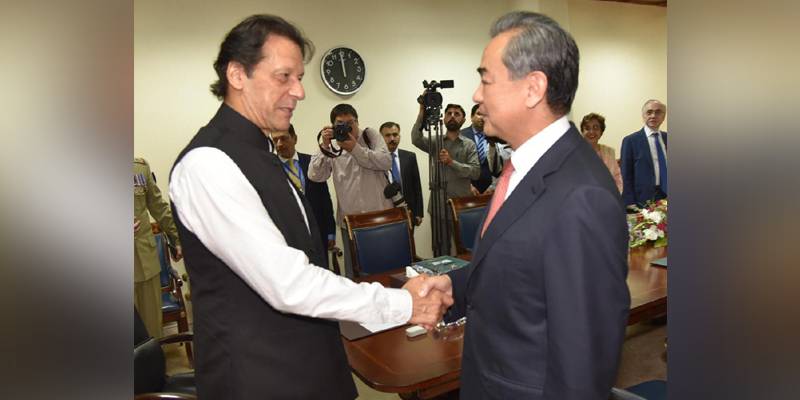 ISLAMABAD - The Chinese State Councillor and Foreign Minister Wang Yi, who is on a three-day official visit to Pakistan, called on Prime Minister Imran Khan in Islamabad on Sunday.

The top Chinese envoy led a high-level delegation including three Vice-Ministers to PM Office to discuss regional situation and global issues with the new government in the South Asian country.

The Chinese also conveyed the invitation of Premier Li Keqiang for an official visit to PM Imran.

Imran Khan, who took the office last month, thanked Mr Yi for the good wishes of Chinese leadership. He reiterated that friendship with China is a cornerstone of Pakistan’s Foreign Policy.

He also thanked Chinese Premier Li Keqiang for his congratulatory telephone call and for his message of support to the new government.

An official press release states that the Pakistani premier thanked his Chinese counterpart for the invitation to visit China and looked forward to his visit and meetings with the Chinese leadership.

Khan also reiterated that his government is committed to the implementation of CPEC.

Yi began his three-day official visit to Pakistan on Friday, in the first high-level meetings between the neighbours since Imran Khan took office.

On Saturday, the Chinese FM led a high-level delegation to the General Headquarters (GHQ) where they met Chief of Army Staff (COAS) General Qamar Javed Bajwa to discuss the regional security and bilateral cooperation.

Wang's visit comes days after Pompeo's trip to Pakistan last week along with the US chairman of the joint chiefs of staff, the first high-level US visit to the new government, with the secretary of state saying he was hopeful for "a reset of relations" between the two countries.

He is the first senior Chinese official to hold meetings with the new government, having been invited by the Pakistani foreign minister.

Beijing has pledged $57 billion in loans for Pakistan as part of its vast Belt and Road initiative, deepening ties at a time when Islamabad's relations with Washington are fraying over how to deal with militants waging war in Afghanistan.