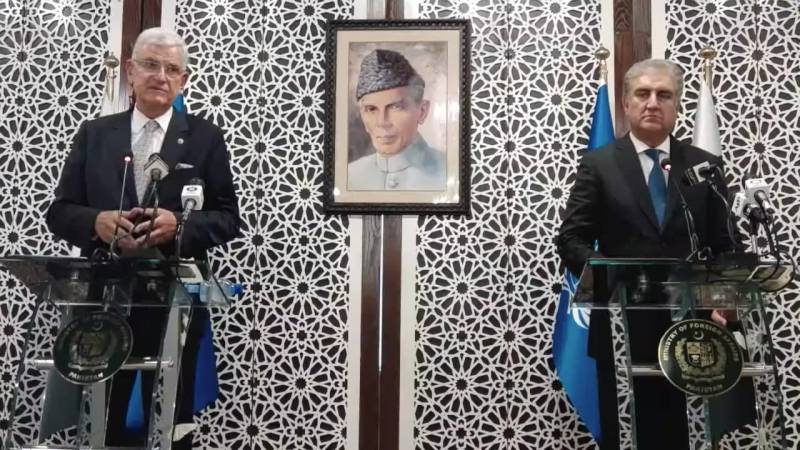 ISLAMABAD – The President-elect of the UN General Assembly has stressed that resolution of Jammu and Kashmir dispute is key to sustainable peace in South Asia, the state broadcaster reported on Monday.

Addressing a news conference along with Foreign Minister Shah Mahmood Qureshi in Islamabad, Volkan Bozkir said regional security should be maintained through political and diplomatic means. Difficult challenges can be resolved peacefully through meaningful mutual engagements, he added.

Volkan Bozkir further said Foreign Minister Shah Mahmood Qureshi and Prime Minister Imran Khan presented their approach to the issue during talks today. "If my assistance is requested by the parties, he will be ready to provide contributions within his mandate," he offered.

Foreign Minister Shah Mahmood Qureshi said the UN Security Council has deliberated on the lingering dispute three times in a year which is unprecedented and we are grateful to it.

He said Pakistan desires that the discussion on the dispute is also held in the UN General Assembly as it is the pulse of the world that highlight the views of the comity of nations.

The Foreign Minister said the people of occupied Jammu and Kashmir are concerned over the demographic change taking place there.

"If Kashmir issue is not resolved, peace in the region will remain disturbed, and its implications will even go beyond the region," he warned.

Qureshi said Kashmir has become a flashpoint, and the United Nations must act now on the issue.

ISLAMABAD – Prime Minister Imran Khan has urged the United Nations to play its rightful role in addressing the ...

Responding to a question about the UN Military Observer Group in India and Pakistan, Shah Mahmood Qureshi said Pakistan has given freedom to the UN Observers and they share their reports. While on the other, he said, India has obstructed to the working of the UN Observers. He called upon the United Nations to play a role in this regard.

Volkan Bozkir said Pakistan is a key country at the United Nations which makes extensive and substantial contributions to the world body's work including the peace operations. He said the UN looks forward to close cooperation with Pakistan.

Referring to his meeting with Prime Minister Imran Khan, the President elect of the UN General Assembly said Imran Khan is a well-known political figure in the world who has a vision for the region and the world peace and security as well as also other important issues faced by the world including climate change and problems of least developed countries.

He stressed the UN role must also be more towards the countries that are in need.

Volkan Bozkir said the world is currently faced with many challenges including humanitarian and deadly conflicts. He said the unprecedented health challenge of Covid-19 is a threat with social political and economic consequences.

Extending condolences to Pakistan over the loss of lives it faced due to Covid-19, Volkan Bozkir said Pakistan has been a good example for the world to deal with the pandemic through its policies.  He said Pakistan has done better than other countries.

Shah Mahmood Qureshi said he also briefed the President elect of the UN General Assembly about the role played by Pakistan in pushing forward the peace and reconciliation process in Afghanistan, the challenges that lie ahead and the recent positive developments.