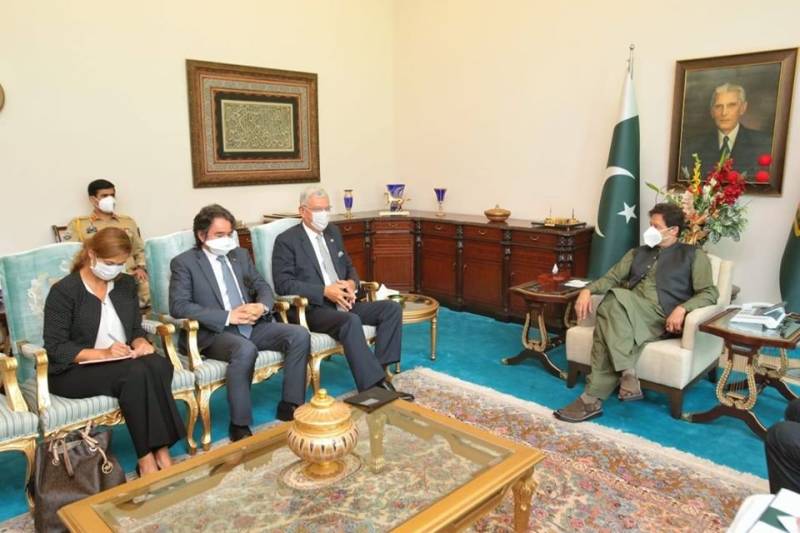 ISLAMABAD – Prime Minister Imran Khan has urged the United Nations to play its rightful role in addressing the grave situation in Indian Illegally occupied Jammu and Kashmir and ensuring that Kashmiris exercise their right to self-determination promised to them in the relevant UN Security Council resolutions.

He was talking to President-elect of the 75th Session of the UN General Assembly Volkan Bozkir, who called on him in Islamabad today (Monday).

The Prime Minister highlighted the dire human rights and humanitarian situation in the Indian illegally occupied Kashmir since 5 August last year, as well as the ongoing gross and systematic violations of human rights of the Kashmiri people and the attempts to change the demographic structure of the occupied territory.

Earlier today, Foreign Minister Shah Mahmood Qureshi sought an effective role of the United Nations General Assembly to end human rights violations in Indian illegally occupied Jammu and Kashmir in light of its vision and resolution of the Kashmir dispute under the Security Council resolutions.

Qureshi added that India took unilateral steps to revoke the special status of Jammu and Kashmir on August 5 last year in clear violation of the UN resolutions and international laws.

The Minister said extra-judicial killing of Kashmiris, firing at innocent civilians and violence has become a matter of routine in Indian illegally occupied Jammu and Kashmir.

Kashmir issue is an international dispute as per the UN resolutions, which has been endorsed by the United Nations in its statement on August 8, 2019.

Referring to the efforts against Covid-19 pandemic, Shah Mahmood Qureshi said comprehensive joint efforts will have to be made at international level to fight the pandemic.

He said several countries are engaged to develop vaccine for Coronavirus. He hoped that when prepared, the vaccine will be available for all the countries, particularly the developing countries.

The two leaders also exchanged views about the efforts for peace and stability in the region, including Afghan peace process.

The Foreign Minister said Pakistan has been playing its reconciliatory role for peace in Afghanistan under a shared responsibility.

He said intra-Afghan dialogue is imperative for durable peace and stability in the region.

Earlier, President-elect of the United Nations General Assembly (UNGA) Volkan Bozkir arrived in the Ministry of Foreign Affairs for talks.

On arrival at the Ministry, the Foreign Minister received the visiting dignitary.

The Foreign Minister and the President-elect of the UN General Assembly are scheduled to address a joint press stakeout.

Volkan Bozkir has also planted a sapling at the lawn of the Ministry of Foreign Affairs under the national plantation drive.