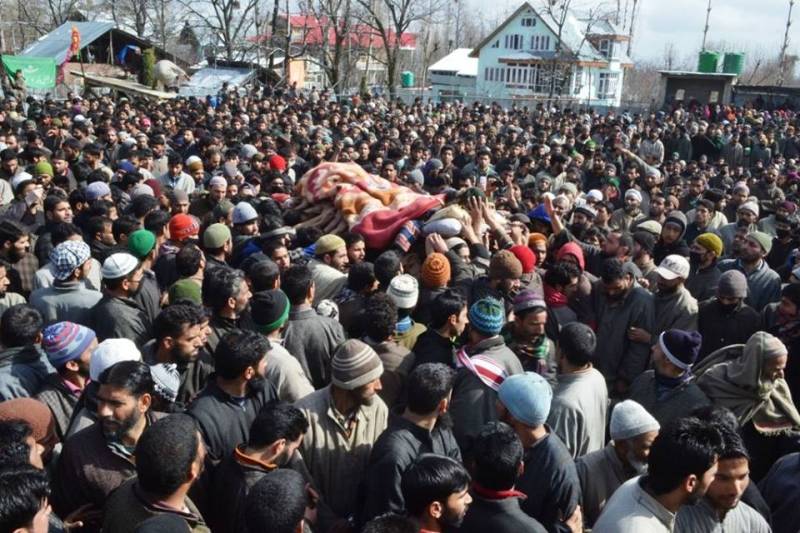 ISLAMABAD - Indian troops, in their unabated acts of state terrorism, have martyred 94,594 innocent Kashmiris, including 7,076 in custody, since January 1989 till date.

A report released by the Research Section of Kashmir Media Service on the occasion of the World Human Rights Day, on Saturday, revealed that these killings rendered 22,831 women widowed and 107,603 children orphaned.

The report said that the troops disgraced 10,816 women and damaged 107,725 residential houses and other structures. It maintained that Indian troops and police subjected over 8,000 people to custodial disappearance in the period.

The reports maintained that the puppet authorities have kept the All Parties Hurriyet Conference Chairman, Syed Ali Gilani, and General Secretary, Shabbir Ahmad Shah, under house detention or in custody throughout this year and they have not been allowed to offer Juma prayers.

Other leaders including Mirwaiz Umar Farooq, Muhammad Yasin Malik, Agha Syed Hassan Al-Moosvi Al-Safvi, Zafar Akbar Butt, Bilal Siddiqui and Mukhtar Ahmad Waza were put under detention either in their houses or in jails time and again and were not allowed to carry out their political activities.

The report said that after the extra-judicial killing of popular youth leader, Burhan Wani, on July 8, 2016, over 115 civilians have been killed and more than 15,800 injured so far due to the firing of bullets, pellets and teargas shells by Indian police and troops on peaceful protesters.

The eyesight of over 1,250 youth including girls has been damaged due to the pellet firing by Indian forces’ personnel.

Meanwhile, Hurriyet leaders in their statements in Srinagar have appealed to the United Nations to monitor the worst situation of the occupied Kashmir and to take steps towards resolving the Kashmir dispute for ensuring durable peace and stability in the region.