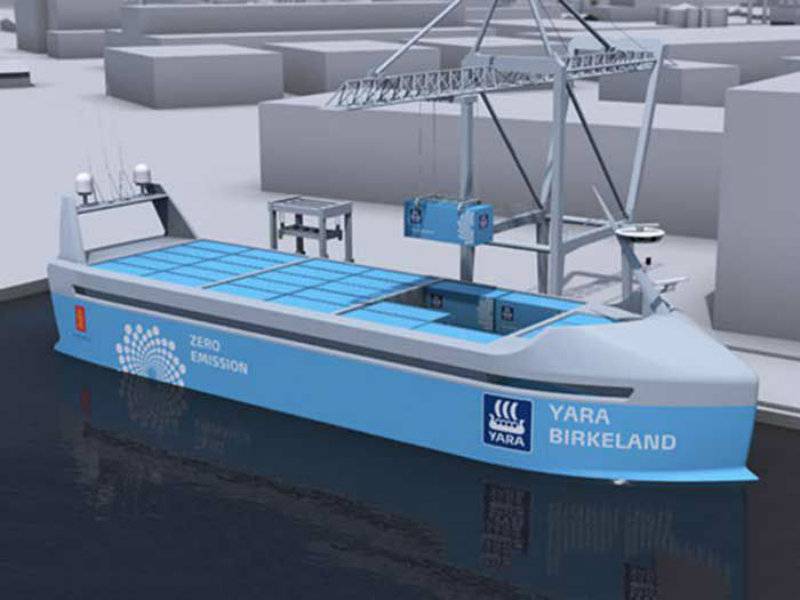 OSLO - Zero emissions, zero ballast - and zero crew. This is what Norway is planning for.

Fertiliser company Yara International has teamed up with industrial group Kongsberg to build the world’s first autonomous and fully electric cargo ship next year that will save 40,000 truck journeys per year.

To be named Yara Birkeland, after Yara's founder, scientist and innovator Kristian Birkeland, the zero emission container feeder vessel is planned to enter service in the latter half of 2018, shipping products from Yara's Porsgrunn production plant to Brevik and Larvik in Norway.

With a range of more than 65 nautical miles, the ship will be able to haul roughly 100 containers at a speed of 12 to 15 knots, according to the project's director, Bjorn Tore Orvik.

Yara Birkeland will initially operate as a manned vessel, moving to remote operation in 2019 and to fully autonomous operations from 2020. The new zero-emission vessel is seen as a game-changer for global maritime transport contributing to meeting UN sustainability goals.

No word yet on the ship's dimensions, what shipyard it will be built in, what it will cost, or the technology that will be used to achieve zero ballast operation.

But the switch is expected to reduce CO2 emissions by 678 tonnes per year, according to Yara, with the electricity used to charge the ship's batteries coming almost exclusively from hydro plants.

While Norway is a major oil producer it has been a leader in the adoption of electric cars thanks to generous tax incentives and has experimented with electric-powered ferries to cross its famous fjords.

Earlier this year, authorities in the capital city of Oslo offered the residents $1,200 to buy an e-bike in a bid to push a general modal shift away from cars.

The goal is to help residents - rich and poor alike - find a new reason to leave the car at home.