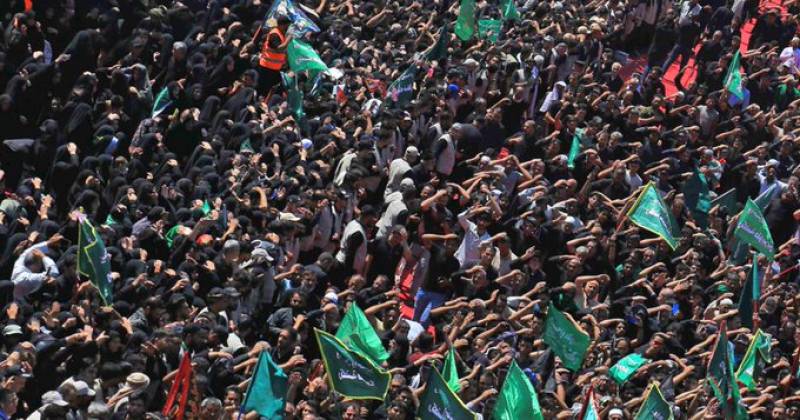 ISLAMABAD - Youm-e-Ashur was observed across the country with religious reverence on Tuesday amid tight surveillance to avoid any untoward incident to pay homage to the sacrifices rendered by Hazrat Imam Hussain (RA) and his companions in Karbala .

Processions carried out in various cities concluded peacefully as thousands of security personnel were deployed on the routes and mobile phone services remained partially suspended in sensitive areas across the country.

In Rawalpindi, the central procession of Ashura was taken out from Imambargah Col Maqbool Hussain and culminated at Imambargah Qadeemi after passing through its designated route; the Metro bus service remained shut in view of security measures.

Mourners who sustained injuries owing flagellate were provided with bulky dressing, bandages and appropriate medication by trained emergency medical technicians, while out of 2132 injured mourners having severe injuries and deep cuts, 19 injured mourners have been shifted to different hospital of Rawalpindi after provision of first aid by Rescue1122 professionals.

KARBALA - At least 31 pilgrims were left dead on Tuesday in a stampede at a major shrine in the Iraqi city of Karbala ...

Meanwhile, in Lahore, main Shabeeh e Zuljinah procession of 10th Muharram was taken out from Nisar Haveli inside Mochi Gate of Old Walled City and concluded at Karbala Gaamay Shah this evening.

Punjab Inspector General of Police Arif Nawaz Khan visited control room in Central Police Office (CPO) and reviewed the working. During the visit, AIG Operations Imran Kishwar briefed the IGP about the current situation of the main procession of 10th of Muharram-ul-Haram.

The IGP was also briefed about the processions and Majlis in different districts of the province.

IGP Arif Nawaz Khan speaking on the occasion directed the staff of the control room to keep performing their duties with commitment and dedication.

In Karachi, the main procession was taken out from Nishtar Park which after passing through Peoples Chowrangi, Saddar dawa Khana and Bolten market culminated at the Imam Bargah Hussenian Iranian Kharadar.

Strict security measures were taken and a ban on pillion riding was imposed in the city whereas cellular services partially suspended in some areas of the city.

The main procession of Ashura was taken out from Kala Imambargha at Prince Road by Balochistan Shia Conference President Sayed Dawood Agha and others in Quetta.

The cell phone and internet services remained suspended in the city as part of foolproof security measures. Aerial monitoring of Muharram processions was also carried out in the provincial capital.

He further informed media that in Quetta 7500 of police, CTD, Frontier Constabulary and Balochistan Constabulary personnel had been deployed.

Several check posts had also been set up in the city to check vehicles entering the city. The main procession in Quetta culminated at Alamdar road after passing through its traditional route.

According to the DIG, there were 56 Imambarghas’s in the city of which 10 were considered to be highly sensitive.

The entry of vehicles and pedestrians to all roads and lanes connecting the route of the procession was blocked by the placing of containers, besides all shops and markets along the route were sealed.

Around 168 roads and streets were sealed, while on 198 buildings FC personnel and policemen were deployed for security.

To pay homage to Hazrat Imam Hussain (R.A) and Martyrs of Karbala Youm-e-Ashur was also observed in Gilgit-Baltistan.

The main procession started from Central Imamia Mosque in the morning which passed through the main bazar and culminated at the same place in the evening.

Gilgit-Baltistan administration made elaborate security arrangements to ensure protection to all processions.

A control room had also been set up in Home department Gilgit for emergency response.