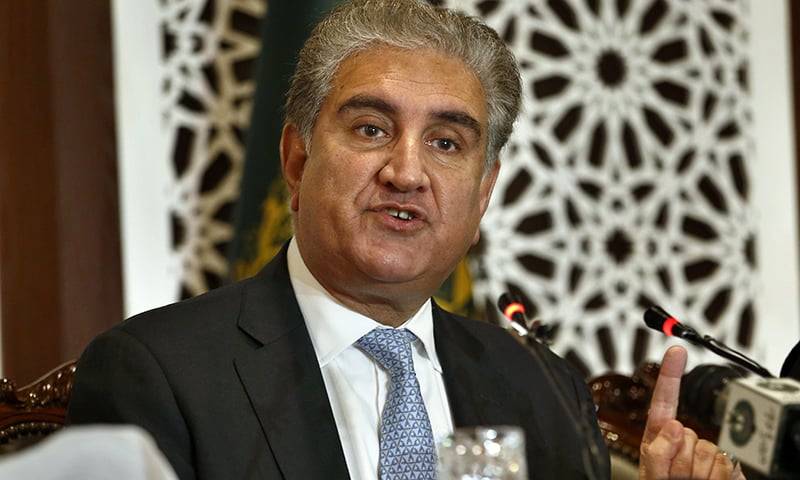 Addressing the 42nd session of the United Nations Human Rights Council in Geneva on Tuesday, Qureshi said he has knocked on the doors of the Human Rights Council, the repository of the world’s conscience on human rights, to seek justice and respect for the people of Indian occupied Jammu and Kashmir .

The foreign minister said that the international community must not remain indifferent to the tragedy that is unfolding in occupied Kashmir .

"We must not allow this august body to be embarrassed on the world stage. As a founding member of this council, Pakistan feels morally and ethically bound to prevent this from occurring," he stressed.

Qureshi said political, commercial, and parochial considerations should not cloud and impair our thoughts and action and we must act decisively and with conviction on the issue.

Qureshi urged the UNHRC to pay heed to the plight of the Kashmiri people and to address the warning signs of a looming 'human catastrophe'.

The minister emphasized that the organization should take steps to bring to justice the perpetrators of human rights violations of Kashmiris and in this context, constitute a Commission of Inquiry (COI), as recommended by the Office of the UN High Commissioner for Human Rights.

The minister said the Office of the High Commissioner and the Human Rights Council’s special procedures mandate holders should be authorized to monitor and report on India’s human rights violations in occupied Kashmir and regularly update the council.

Qureshi urged the body to call upon India to allow unrestricted access to human rights organisations and international media to occupied Kashmir .

At the start of his address, the foreign minister said that basic and inalienable human rights of the people of occupied Kashmir were being 'trampled with impunity' by India .

"The people of this occupied land are suffering systematic, and serial, violations of their fundamental freedoms," he said.

Qureshi highlighted that the people of the disputed valley had been virtually caged by an illegal military occupation for the past six weeks.

Qureshi spoke at length about the situation in occupied Kashmir and said the valley had been transformed by India into the "largest prison in the planet" where basic amenities and means of communication were not accessible.

Pakistan 's foreign minister said shops and hospitals in the region were running out of supplies and the political leadership of Kashmir had been placed under house arrest or imprisoned.

The foreign minister said international media outlets and neutral observers were also reporting on the atrocities being carried out against the people of occupied Kashmir by India .

With its actions, India was breaching multiple international human rights instruments that it was a party to, Qureshi highlighted.

"This is the true face of the so-called largest democracy of the world. This is the conduct of a country, which aspires to be a permanent member of the United Nations Security Council," Qureshi observed.

Qureshi said at the root of this mayhem is India’s refusal to grant the people of Indian occupied Jammu and Kashmir their right of self-determination.

He reiterated that India 's unilateral decision to scrap Article 370 on August 5 was illegal under international law adding that with these illegal changes, India’s presence is, by its own yardstick, naked foreign occupation.

Qureshi said Kashmir had been on the agenda of the United Nations for over 70 years and the meeting of the UN Security Council on August 16 attested to this fact.

The foreign minister said that with respect to the Genocide Convention, Kashmiris — as a national, ethnic, racial and religious group of people — face grave threats to their lives, way of living and livelihoods from a murderous, misogynistic and xenophobic regime.

"I shudder to mention the word genocide here, but I must," Qureshi shared.

Qureshi said Pakistan had suggested numerous bilateral and multilateral mechanisms, including doubling the strength of the UN Observers Mission to monitor the Line of Control (LoC), Dawn News reported.

"I have every fear that India will once again resort to false-flag operations, and use the bogey of terrorism as a red herring, to divert international opinion, even attack Pakistan ," he warned.

Qureshi said the Human Rights Council must pay far greater and immediate attention to the human rights of the people of Indian occupied Jammu and Kashmir , reiterating Pakistan’s endorsement of the recommendations of two Kashmir reports issued by the Office of the United Nations High Commissioner for Human Rights.

"History would be a most unforgiving judge if we fail, yet again, the people of this illegally occupied territory, in their moment of greatest peril," he said concluding his address.