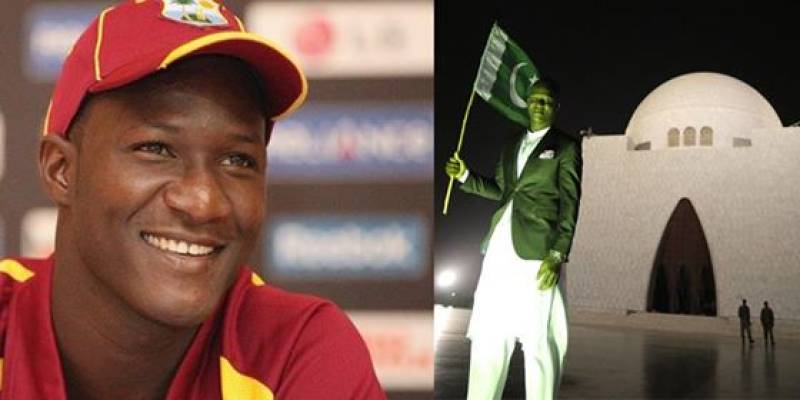 KARACHI -Peshawar Zalmi Skipper Daren Sammy along with Chairman Javed Afridi visited the mausoleum of Quaid-i-Azam Mohammad Ali Jinnah in Karachi on Sunday (yesterday). The West Indies cricket star paid homage to the great leader and the founder of Pakistan, saying: "It was an honor to pay my respects to the great man".

Daren Sammy, who won the T20 world cup for West Indies, was amazed by the design of the mausoleum and its beautiful white color. He also visited the museum of Quaid's belongings and learned a lot about the great man.

LAHORE -  Peshawar Zalmi captain Darren Sammy said on Sunday that he had brought a lot of smiles in Lahore and ...

.@PeshawarZalmi skipper @darensammy88 paid his respects at the tomb of our father of the nation Quaid-e-Azam Muhammad Ali Jinnah. He remembered Quaid's famous quote of Unity, Faith & Discipline & appreciated the wisdom of our great leader. 🇵🇰 pic.twitter.com/PcYxIuuHJz

The Caribbean cricketer also shared his words and said: "Quaid was a great man and one of his famous quotes - unity, faith, and discipline - are the three words that I live by. It was an honor to pay my respects to a great leader and visionary who paved the way for the nation of Pakistan."

Taking to Twitter, Daren shared: "I am extremely honored to have visited the tomb of Mohammad Ali Jinnah founder and father of this great nation."

I am extremely honored to have visited the tomb of Mohammad Ali Jinnah founder and father of this great nation. A legend whose message of faith unity and discipline can make this world a much better place. I am truly inspired🇵🇰 pic.twitter.com/mBjvwrolR3

Clara's Boy aka Daren Sammy has yet again won the heart of Pakistanis with his latest post and people can't stop themselves from praising the international cricket star:

Daren Sammy has been promoting Pakistani culture and tourism since the PSL had started. The ace player has not only praised Pakistanis but has also expressed the desire to living here.

There are lots of things Biryani and the Pakistan Super League have in common, Pakistanis are absolutely crazy about ...

We love you, Daren Sammy!