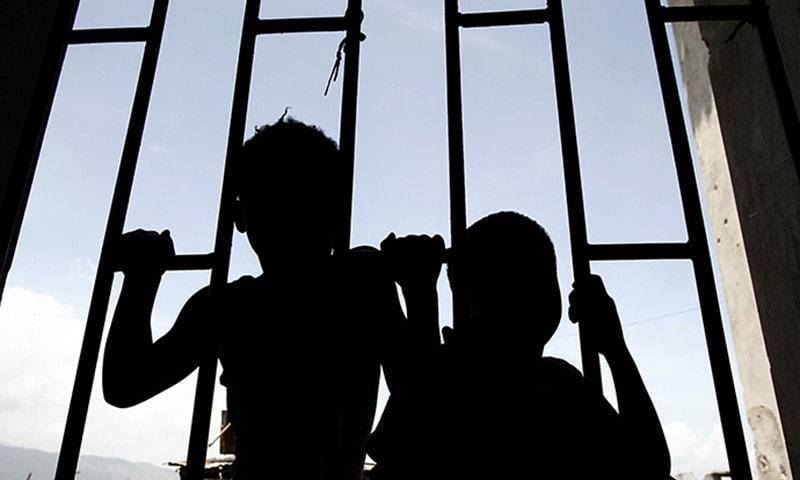 A few days ago, Mingora police arrested a key member of a gang that kidnapped children and forced them to have sex in underground cells while being filmed.

Aurangzeb was arrested on a tip-off provided by a 13-year-old boy who was kidnapped by the gang in 2014 and set free recently.

Mingora city DSP Sadiq Akbar said the police had obtained a three-day physical remand for Aurangzeb from the judicial magistrate. The suspect was produced before the court on Wednesday.

The boy’s father had filed a report with the Mingora city policeon Sept 28, 2014 after his son went missing. A case was registered under section 342 (wrongful confinement), 347 (wrongful confinement to constrain a person to illegal act), 365 (kidnapping), 377 (unnatural offence) and 506 (criminal intimidation) of Pakistan Penal Code.

DSP Akbar said that Aurangzeb was caught while having sex with another boy, aged 14. He added that handcuffs and chains were also recovered from the residence.

The unearthing of this child abuse case has outraged both civil society groups and residents of Mingora, who are demanding stern action against the perpetrators.

Shockingly, some policemen were also involved in the child abuse ring. “One day a policeman informed Aurangzeb about a possible raid, upon which the two facilitators took me in a vehicle to Barikot and threw me out,” the 14-year-old told the police.

According to the survivor’s statement, he had gone to the bazaar to buy sweets when two men, who he identified as Sajjad and Umar Khaliq, drugged him and whisked him away in a vehicle. “After sometime when I came to my senses I found myself in a room where Aurangzeb forced me to have sex with him,” the boy told the Dawn newspaper, recalling that he had been subjected to abuse on daily basis.

A man, identified as Sherin Zada, has also provided local journalists with hundreds of photos and videos which were allegedly filmed while Aurangzeb sexually abused different boys. The journalists have handed the material to the Swat District Police Officer Saleem Marwat, who has formed a joint investigation team led by DSP Sadiq Akbar to probe the case.

Sherin Zada, who claimed to have got the material from one of his informers, told journalists that his nephew was also kidnapped by the same gang and was still in their custody.

Surprisingly, the police arrested Sherin Zada, who is also a complainant in the case.

Child rights activists say that incidents of child sexual abuse are rampant in Swat due to police leniency and parents’ carelessness. In addition to stronger measures for child protection in the province, they have called for the immediate arrest and punishment of all gang members.

In August last year, the largest-ever child abuse scandal in the country’s history surfaced after the discovery of 400 videos in which more than 280 children were being forced to have sex. Thousands of copies of the films were reportedly sold for Rs50 each in the Hussain Khanwala village of Kasur.

Most of the victims were under 14, including a 6-year old boy who was forced to perform homosexual acts, and a 10-year old schoolgirl who was filmed being molested by a 14 year old boy.

The gang perpetrated the abuse in many cases and then used the videotapes of the assaults to blackmail the victims and their families to hand over millions of rupees. Many of the children stole gold ornaments from their parents to pay off their abusers to keep their ordeal secret.

The videos were also sold to pedophiles in Europe and America, who paid very high prices for each clip.

Although the main suspect had been released after Rs. 5 million bribe was paid on his behalf, the police has made several arrests under immense pressure from media and rights organizations. However, many gang members at still at large and the victims families say they had been subjected to pressure by a local political figure to withdraw their allegations.