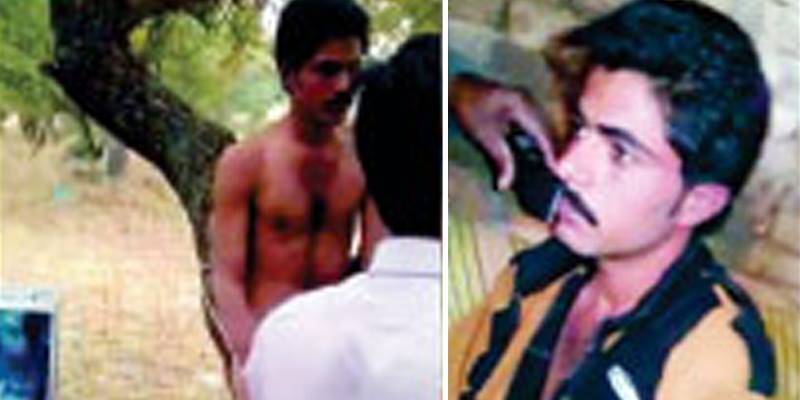 CHAKWAL - A young boy who was alleged to have illicit relations with his suitor was stripped and brutally tortured in Chakwal district of Punjab, it emerged on Monday.

According to the application filed by the victim Muhammad Khan, he was heading to Chakwal from Manwal area when the relatives of the teenage girl - alleged to be his suitor - intercepted him and physically tortured him.

In his application, the victim nominated relatives and cousins of the girl named Mohsin Shehzad, Masood Safdar, Farrukh Abbas, Zeeshan Zafar, Hassan Raza, Shahid Riaz and Azhar who, according to him compelled him to stop as he was on his journey.

The boy continued that in the meantime, a few unidentified individuals, who were identified as Riaz, Tahir, Imran, Asif, Ali Abbas and others gathered around him and snatched his motorcycle, a wallet carrying around Rs 3100, national identity card and ATM card.

He stated that the groups then forced him to a nearby house where another individual Wali Dad shaved off a side of his eyebrows and moustache, Daily Khabrain reported.

Muhammad Khan while recording his statement said that after the inhumane treatment, the above-mentioned group forced him into a rickshaw from where they travelled a few kilometres away from the 'Khoday' village.

The most shameful and brutal part of the whole incident was when the victim was stripped, tied to a tree and was tortured, a video footage of which was also made by Zeeshan Zafar and Shahid Riaz.

Muhammad Khan while detailing as to why he was subjected to the treatment, expressed that the abductor Shahid Riaz suspected that he used to visit their home in their absence.

He stated that the abductors kept him in illegal confinement and deprived him off his cash and valuables.

Soon after the application was filed, ASI Zameer Hussain, on the instructions of DPO Chakwal arrested five individuals including father and brother of the girl while a search for the remaining suspects is underway.