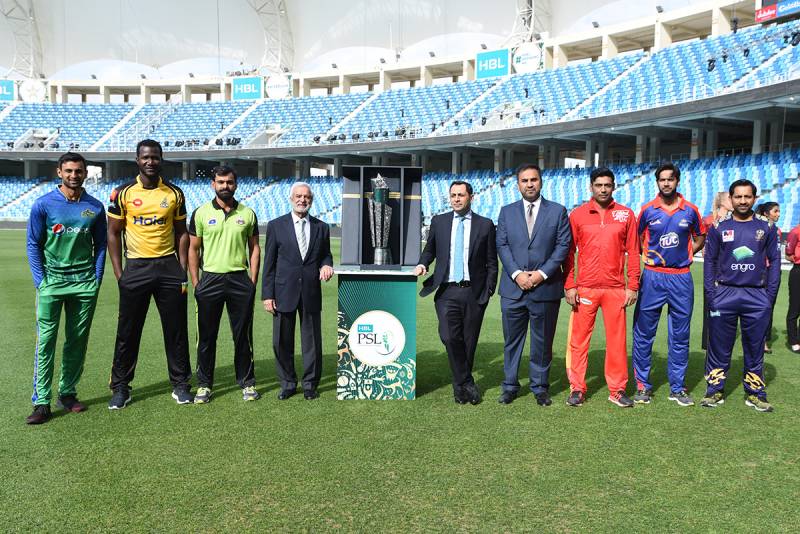 DUBAI – The HBL Pakistan Super League 2019 trophy was unveiled Tuesday at a crowded press conference at the Dubai International Stadium, where the tournament would kick-start on Thursday with a glittering opening ceremony followed by the opening match between defending champions Islamabad United and Lahore Qalandars.

“The HBL PSL 2019 is set to provide incredible excitement to cricket fans all around the world; we thank our sponsors, partners, the six franchises and all stakeholders who have contributed in putting together this cricket extravaganza. We look forward to seeing a competitive tournament with a galaxy of international and Pakistan stars showcasing their talent,” said Ehsan Mani. 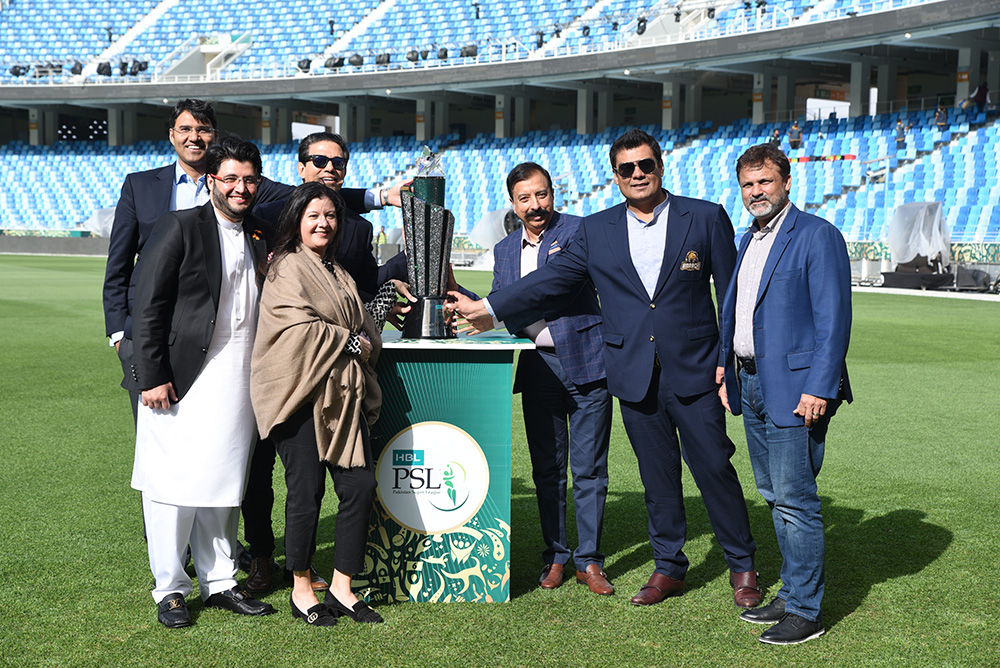 Naveed Asghar and Arsalan Saif spoke about the opportunity that the HBL PSL provides to its sponsors and how the tournament has become an international cricket spectacle that is hugely attractive for local and international brands.

Captain of the defending champions Islamabad United, Mohammad Sami said, “It is a huge honour for me to be given this responsibility to lead Islamabad United this year. I have looked at the squad and there are so many options for us. The young guys have impressed everyone in our training sessions and we are carrying on our tradition of developing the emerging talent of Pakistan. I hope I can lead this group to another HBL PSL trophy.

“We are all working really hard but, in the end, we just want to keep things simple, play good cricket and if we do that then the results will come on their own.”

Captain of the HBL PSL 2017 champions Daren Sammy said, “All six teams are very balanced and that is good because we will get to see quality cricket in HBL PSL once again.

I have had the great honour of leading a very talented Peshawar Zalmi side for two years and, this year, we have greater depth in the squad and the experience that guys like Misbah and Pollard bring to our squad is invaluable. We always get great support from our Zalmi fans in the UAE but we are all very excited to experience the love and warmth of crowds in Karachi once again. We are Zalmis and our goal is always to win.”

Karachi Kings captain Imad Wasim said, “The Karachi Kings squad has a balanced core of local players and some excellent foreign players. We are keen to do well this year and get our hands on the magnificent HBL PSL trophy. It will be a dream come true for all of us to lift the trophy in front of our home crowd on 17 March and we are going to do everything in our control to win it."

King of Karachi, @simadwasim unveiling the Best Bowler of the Tournament Trophy. pic.twitter.com/y4vmayQbYI

Sarfaraz Ahmed who is captaining the Quetta Gladiators for the fourth successive year said, "I think we have a lot of depth in our squad this year. We have come close in the past three years but we have not been able to get the desired results. The entire Quetta Gladiators squad is determined to change that this time around.

We focused on our retention list this year since we wanted consistency in developing our squad. It helps that we have senior pros like Shane Watson and Rilee Rossouw returning and they will help the young boys ease into the tournament. I am particularly excited about our young pace bowling talent and I can't wait to see Ghulam Mudassar and Mohammad Hasnain in action whenever they get a chance."

Captain of the Multan Sultans Shoaib Malik said, "We have a strong squad with depth and variety, and we all are looking forward to a competitive HBLPSL Season four. Of course, our eyes are on the trophy, and we as a team have decided that the best way to get there is to only focus on one match at a time. I wish rest of the teams the very best from the Sultans."

Lahore Qalandars captain Mohammad Hafeez said, “This is an exciting time for me because I am leading a very talented bunch of cricketers. We have reworked our strategy this year and we are confident that if we play our natural game, and enjoy each moment of the tournament, we will do well. We realise what our performance means to our Qalandars fans across the world and we want to make them proud of their association with us. I am confident that they will be right behind us, as always."

The star, the crescent, the green and the white! This year’s HBL PSL Trophy is a visual representation of the Pakistani flag in all its sparkling beauty.

The central core, covered in Swarovski’s 16 faceted Xirius crystals one by one rises up as a dazzling green beam and shows off the majestic Shooting Star at the pinnacle.

Around the star, six pillars covered on the sides with Swarovski’s Fine Rocks, open to make a crescent, depicting the six participating teams of the HBL PSL.

More than 50,000 crystals have been used in the trophy that took 4 months to be made, from concept to creation.

‘The Pakistan Trophy’ celebrates the different cultures in Pakistan and the harmony with which they stand together to call this country home. The green and white unite the many colours of this land under one flag, each colour being vivid as it is.

HBL PSL is driven by this diversity and celebrates the best of Pakistan’s cricketing talent with the people of Pakistan.

Keeping up with the HBL Pakistan Super League traditions, the league will be giving out magnificent Swarovski trophies for top performers of the tournament.