On this day in 1999, Nawaz Sharif’s govt was dismissed in bloodless coup 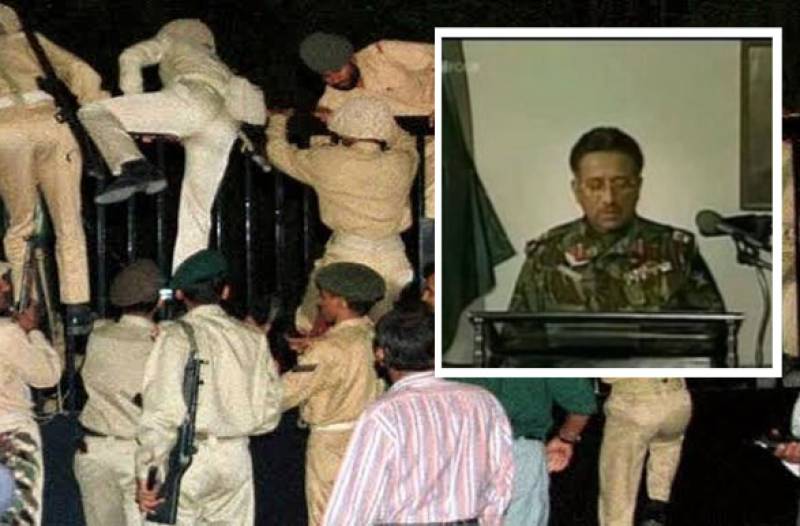 The 1999 overthrow was the fourth such attempt in Pakistan’s history that changed the future politics in the country and was done on the order of former Army Chief General Pervez Musharraf – who is in UAE nowadays suffering from a rare medical condition.

On October 12, 1999, the former four-star general landed in Pakistan from a foreign trip abroad to lead a military regime after fellow generals had already deposed PML-N supremo’s government after the latter attempted to remove Musharraf from the post of the country’s top general.

In response, Musharraf board a national carrier flight to the country’s southern region while his loyal general began to mobilise troops stationed in nearby Rawalpindi.

As deposed PM appointed Gen Ziauddin as the new head of the military at his official residence but all of the top brass reportedly refused to accept his command. 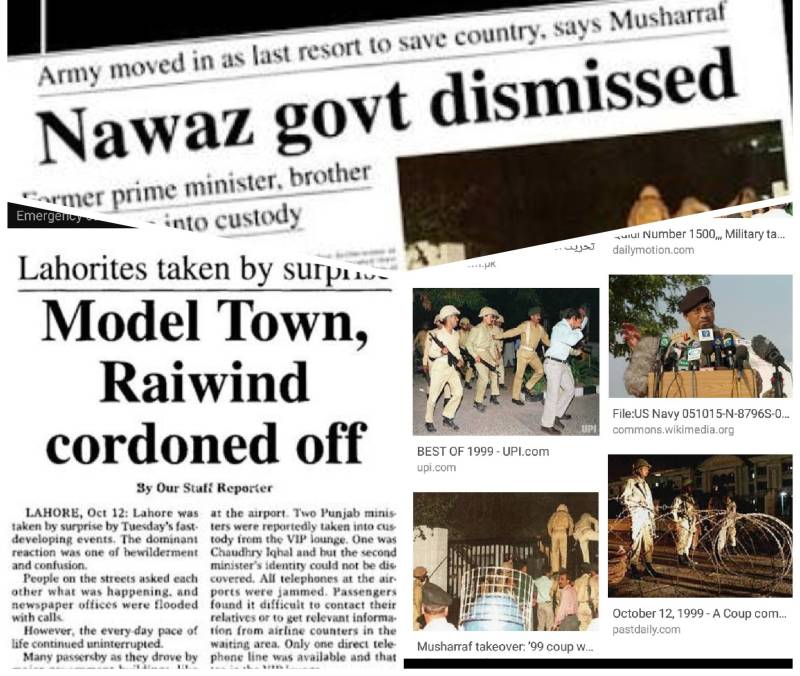 A clipping from a local newspaper

Amid the unfolding situation, former PM and General Ziauddin realised they had to Musharraf from returning. PM’s office announced Gen Musharraf’s retirement at around 4 pm.

Later, armed forces from the 111 Brigade of the 10th Corps were on their way to the capital while other battalions stood guard outside the top court. Some troops climbed over the main gate of state-run TV during the military coup.

Following the orders, then PM Sharif refused to resign and was later escorted from the building and placed in a guest house. Forces then surrounded his home, and closed all airports, along with the state-run television and radio stations for hours.

Musharraf in a televised clip, addressed the nation saying “your armed forces have never, and shall never, let you down. We shall preserve the integrity and sovereignty of our country to the last drop of our blood. I request you all to remain calm and support your armed forces in the re-establishment of order to pave the way for a prosperous future for Pakistan.”

PML-N and other workers were detained in nationwide arrest in wake of the corruption and governance-related cases. Later, ousted PM Nawaz Sharif and his brother Shehbaz Sharif were arrested and later exiled from Pakistan, as a part of a deal in December 2000.

Musharraf then became chief executive and started reforms of the National Security Council to run state affairs. Chief Justice, including nine senior justices, refused to take an oath and later stepped down.

Former Pakistani President, Rafiq Tarar, remained President of Pakistan from 1998 to 2002 and was replaced by Musharraf after the completion of his five-year tenure. It was also the end of the two-party system in Pakistan.

Years after the coup, the current ruling party pushed for Musharraf to be tried for treason as the latter suspended the constitution and imposed emergency rules.

In the year 2013, a court was established that handed down the death sentence to former Army Chief in absentia for treason over his 2007 imposition of emergency rule however Musharraf was allowed to leave country in 2016.

Later, a provincial high court overturned the decision and dissolved the special court that had convicted former COAS.