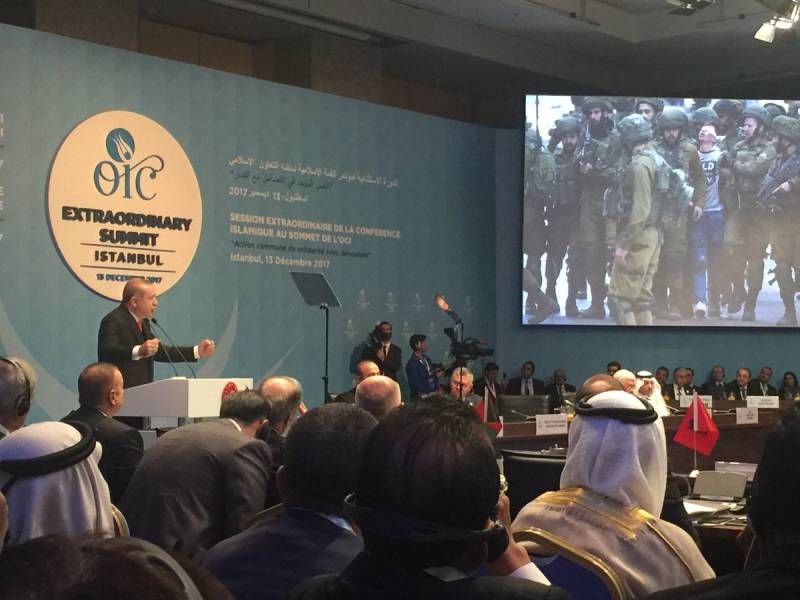 ISTANBUL - A special session of Organization of Islamic Cooperation (OIC) has kicked off in Turkey to deliberate over the chaos following the US president's decision to recognise Jerusalem as the capital of Israel - an illegitimate state in Palestine.

The summit is being chaired by Turkish President Recep Tayyip Erdogan, whose country holds the rotating chairmanship of the OIC, with Pakistan's Prime Minister Shahid Khaqan Abbasi along with Punjab Chief Minister  Shehbaz Sharif and Foreign Minister Khawaja Asif in attendance.

Opening up the debate, Turkish President Erdogan went hard on Israel terming it a state defined by “occupation” and “terror”.

The Turkish president urged the world to recognise occupied East Jerusalem as the 'capital of Palestine' in response to Trump's decision.

'I am inviting the countries who value international law and fairness to recognise occupied Jerusalem as the capital of Palestine,' Erdogan said, adding that Jerusalem was a red line for Muslims countries who would never give up on this demand.

Palestinian President Mahmood Abbas in his address called the decision of US President Donald Trump a 'flagrant violation of international law'.

According to the Palestinian President, the decision of Trump could be used by extremists to 'turn a political struggle into a religious one.'

Abbas warned that there could be no peace or stability in the Middle East until Jerusalem is recognised as the capital of a Palestinian state.

Earlier on Wednesday, foreign ministers from the member states met in Istanbul, where they condemned Donald Trump’s controversial decision and expressed their solidarity with Palestine.

After the meeting, Pakistan's Foreign Office issued a statement implying that the controversial recognition, contrary to international laws was highlighted by the Foreign Minister Khawaja Asif during the meeting.

FM Asif underscored at OiC CFM that US recognition of Jerusalem undermines its role as an honest broker in the peace process.

Top level officials from almost all the Muslim states have shown up at the session to send a message of unity and brotherhood.

During the meeting, the two leaders condemned Trump's Jerusalem move and discussed ideas on expanding cooperation between Punjab and Istanbul.