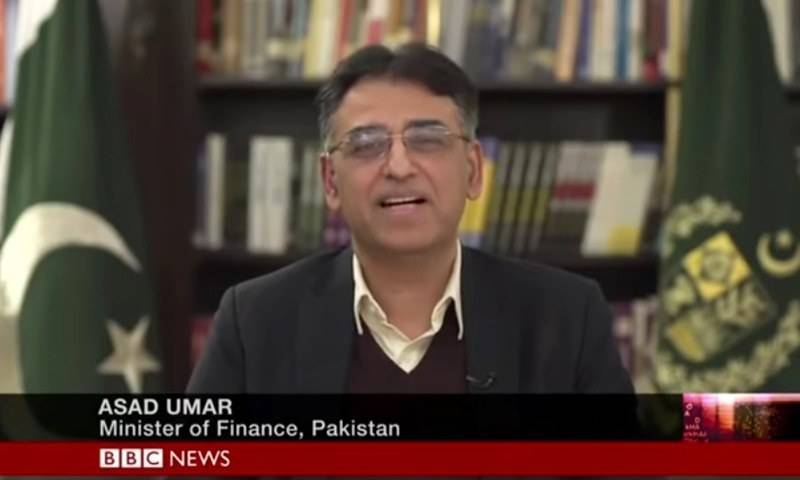 LAHORE - Renowned British public service broadcaster, BBC is facing severe criticism for omitting the statement of Pakistani Finance Minister Asad Umar about Kulbhushan Jadhav, an Indian terrorist, triggering whether the Britishers actually believe in freedom of expression or is it just a sham phrase.

In an interview with BBC’s Stephen Sackur for the well-known show Hardtalk, the finance minister responded to several questions regarding various national issues and also responded to whether foreign forces were active in destabilising Pakistan or not.

The comments of Umar about Jadhav, who was awarded death sentence by a military court in 2017 over espionage charges, were edited out from the TV version of the interview.

When the anchor asked about the external forces, Umar categorically mentioned Indian spy - a section of the recorded interview which was chopped off by the media franchise.

'Pakistan arrested a senior operative from India. His name is Kulbhushan Jadhav. He is in the custody of Pakistan and he gave details of how Indian intervention in Balochistan and other parts of Pakistan [has been] taking place,'Umar had said.

In @BBCHARDtalk interview, @Asad_Umar mentioned Kulbushan Yadav and his admission of terrorist activities in Balochistan which was edited out in the televised show.
Check what was shown by BBC (first 9 seconds) and edited part of what Asad Umar said in between. pic.twitter.com/tvUQm3p8LH

'So is there a terrorist intervention in Balochistan? Absolutely Yes,' Umar added in his comments which were edited out in the pretext of technicalities by BBC.

Later, the whole interview carrying the Jadhav issue discussion was aired on BBC radio, confirming that the TV version was edited.

Pakistan Tehreek-e-Insaf (PTI), the ruling party, also raised the issue of the censorship of the interview by the BBC in a soft way on Twitter; it also shared the interview with mention of Jadhav in Umar's discussion.

BBC's editing also riled Minister for Human Rights, Shireen Mazari who lambasted the media franchise for allegedly censoring the interview and removing the chunk about Jadhav. She branded it "typical bias" on the part of the broadcaster.

"Shameful how BBC censored and chopped off Asad's mention of Indian spymaster Jhadav! Typical bias of BBC!," she wrote on Twitter.

Scores of Twitterati also took a jibe at the channel for the apaprent censorship.

Listen to the Audio of @BBCHARDtalk after 14:30 @Asad_Umar clearly mention #Kulbhushan which was censored shame on @stephensackur who lecture us on freedom of speech , what an Irony ., https://t.co/sDOdzJemQd

After massive criticism from Pakistani Twiteratti, the British broadcaster issued a clarification on Twitter, stating: "The reason Kulbhushan Jadhav’s name was deleted from the TV version of the HARDtalk interview with Asad Umar has a simple technical explanation".

It was not an act of censorship and that the part was deleted because the interview was too long to be aired on TV, the programme handler tweeted igniting questions whether the specific portion was worthless enough to be chopped off.

The reason Kulbhushan Jadhav’s name was deleted from the TV version of the HARDtalk interview with Asad Umar has a simple technical explanation.
The recorded interview was too long for our broadcast slot and so had to be edited. This was done separately for radio and TV. 1/2

In another Tweet, it said" "His [Jadhav] name was omitted from the TV version. This was not an act of censorship, but clearly, confusion has been caused".

His name was omitted from the TV version. This was not an act of censorship, but clearly confusion has been caused, so we are happy to restore that short section to the TV broadcast and we’ll give the new programme an extra airing tonight as well as tomorrow morning. 2/2 https://t.co/STjcCKsWGt

"...so we are happy to restore that short section to the TV broadcast and we’ll give the new programme an extra airing tonight as well as tomorrow morning," read the tweet which was not found impressive by the social media buffs.

The social media users also slammed BBC when it came forward with the eerie clarification.

This clarification will surely cause the conspiracy mill to start spinning at mach speed. https://t.co/CytwxDSe7A

yup. Not buying this for a second. Also its a 14 second clip fgs, and the edit is done in MID SENTENCE. Anyone with a basic understanding of how this works knows this stinks.

KulBhushan Jadhav was arrested from Balochistan in March 2016 and he has confessed to spying for Indian intelligence services. He was convicted by a military court and sentenced to death.

India has maintained he is not a spy, and has accused Pakistan of violating the Vienna Convention by failing to provide him with consular access, as well as breaking international human rights law.

Currently, the International Court of Justice (ICJ) is hearing the case on India's petition. It has fixed February 18 to 21, 2019 date for the public hearing of Kulbhushan Jadhav case between Pakistan and India.