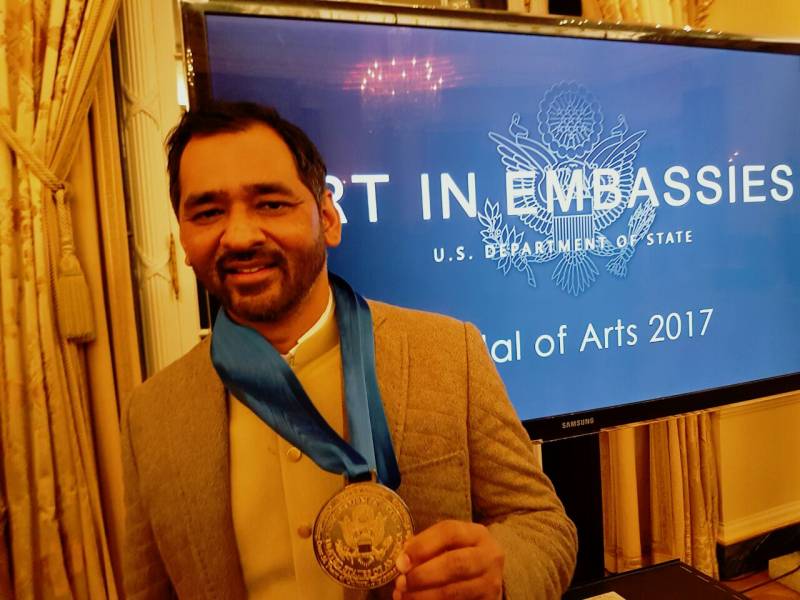 LAHORE - Internationally acclaimed award winning Pakistani artist Imran Qureshi has been honoured with a Medal of Arts Award by the US State Department for 2017, making him the first Pakistani ever to receive this honour.

The awardees for this year also include Nick Cave, Jenny Holzer, Wolf Kahn and Rachel Whiteread. Qureshi was honoured in a ceremony hosted by Deputy US Secretary of State Antony Blinken in Washington D.C on 12th January 2017 at the State Department’s historic Benjamin Franklin Room.

The Medal of Arts award was initiated by Art in Embassies in 2013 to formally acknowledge artists who have played an exemplary role in advancing the US State Department’s mission of promoting cultural diplomacy through the visual arts and international cultural exchange. Each recipient’s artwork serves as a bridge between other nations, encourages discussion and expression and highlights the communal experiences of people from countries, cultures, and backgrounds worldwide. Previously honoured artists include, Jeff Koons, Cai Gou-Qiang, Mark Bradford and Maya Lin amongst others.

Speaking about receiving the Medal of Arts Award, Imran Qureshi said, “I am honoured and proud that my country and art have been awarded – it is recognition not just for me but for Pakistan and especially the contemporary art scene in my country. The reality is that the West is largely only exposed to Pakistan through what their media has shown to them about us, which is often times one-sided and myopic. There is a whole other side of this beautiful country; Pakistani Contemporary art is the most exciting thing happening in Pakistan with the diversity of ideas, concepts and approaches and I appreciate greatly the recognition of this by the Medal of Arts Award.  Further, as an artist, I have always assumed a sense of responsibility to make a significant contribution to creating harmony between different cultures and countries and as a Pakistani am proud to accept this award in the spirit of making this world a better place through art for our future generations.”

“For over fifty years, Art in Embassies has played an active diplomatic role by creating a meaningful cultural exchange through the visual arts. The exhibitions, permanent collections and artist exchanges connect people from the farthest corners of an international community. Extending our reach, amplifying our voice, and demonstrating our inclusiveness are strategic imperatives for America. Art in Embassies cultivates relationships that transcend boundaries, building trust, mutual respect and understanding among peoples…” said U.S. Secretary of State John Forbes Kerry.

“Through culture, we can introduce ideas, and each of these artists has contributed to the artistic landscape of our nation in significant ways,” said Virginia Shore, Art in Embassies’ acting director and chief curator. “Their artwork evokes our universal aspirations as human beings and highlights our shared experiences with people of other lands, backgrounds and faiths.

Imran Qureshi’s work is firmly rooted in the tradition of miniature painting – the subject he teaches at the National College of Art in Lahore – whose acme in the region was reached during the Mughal Empire. Qureshi has been exhibiting internationally for almost twenty years and has managed to greatly expand the language of miniature painting, both in traditionally sized and crafted work and in many original variations in the form of site-specific installations, three-dimensional works, videos, and paintings on paper and canvas.

His work is an example of a practice that combines traditional motifs and techniques with current issues and the formal language of contemporary abstract painting. His most recent notable work includes being invited to create an installation for the Metropolitan Museum of Art for their annual Roof Garden Commission where he incorporated the lessons of abstract painting in his investigations into ornamentation, line, and colour and primarily examines what connects us across cultures and throughout time.

He was also made ‘Deutsche Bank Artist of the Year’ in 2013 with an exhibition at the Kunsthalle, Berlin, Macro Museum Rome and Ikon Gallery, Birmingham, in 2014. Imran Qureshi currently resides in Lahore with his wife Aisha Khalid who being an artist herself has also partnered with him for multiple shows across the globe.