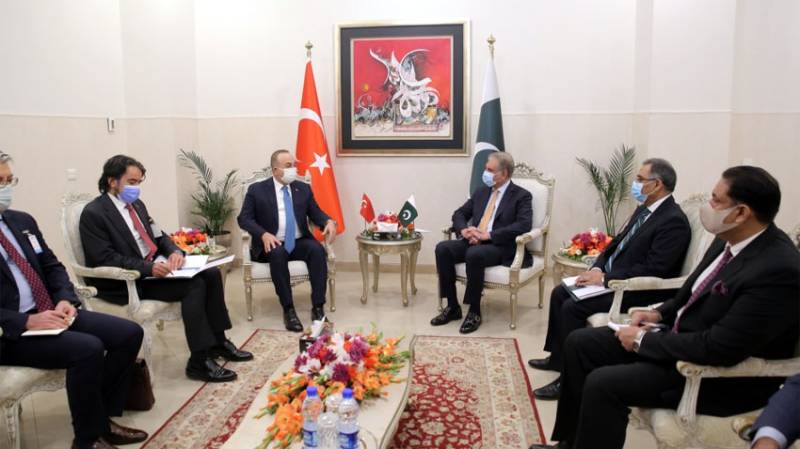 ISLAMABAD – Turkish Foreign Minister Mevlut Cavusoglu met with his Pakistani counterpart Shah Mehmood Qureshi on Wednesday (today) during his visit to Pakistan for a trilateral meeting.

During the meeting, both sides discussed issues of mutual interest, including bilateral relations and important regional and global issues.

Both foreign ministers expressed satisfaction over the nature of bilateral relations between Pakistan and Turkey, agreeing to ensure early implementation of the decisions taken at an earlier meeting of the High-Level Strategic Cooperation Council held in Islamabad.

The rising trend of Islamophobia and stressed for joint efforts to protect the Islamic values were also discussed in the meeting.

Both sides emphasised the need for implementation of the Pakistan-Turkey Strategic Economic Framework at the earliest.

ISLAMABAD – The foreign ministers of Pakistan, Turkey, and Azerbaijan will meet in Islamabad today for the second ...

Qureshi also updates his Turkish counterpart about the current situation in Indian Illegally Occupied Jammu and Kashmir (IIOJ&K). He also thanked Turkey for its firm support to Pakistan on the Kashmir dispute.

Pakistan has launched an e visa facility for Turkish businessmen in order to bolster trade relations between the two countries, Qureshi said.

ISLAMABAD – Turkey's Foreign Minister Mevlut Cavusoglu, who has arrived in Pakistan on a three-day official ...