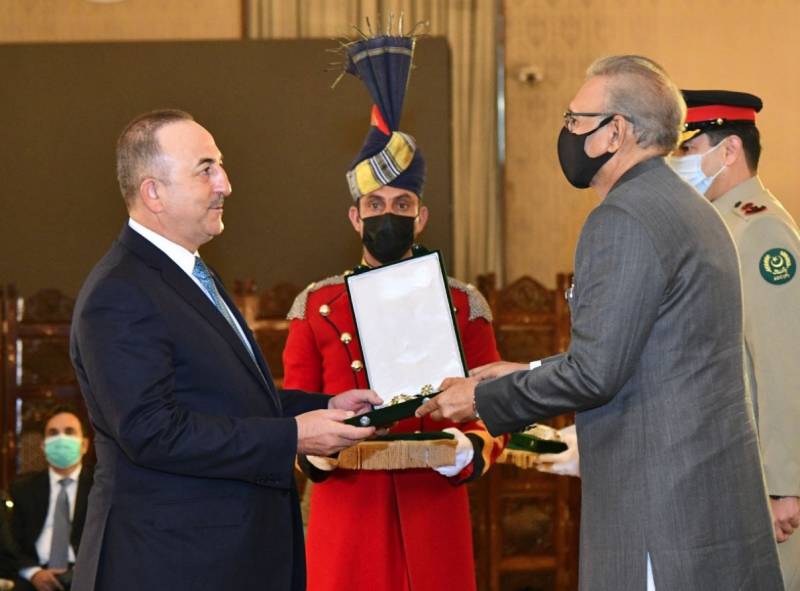 ISLAMABAD – Turkey's Foreign Minister Mevlut Cavusoglu, who has arrived in Pakistan on a three-day official visit, has conferred with the second-highest civil award on Wednesday.

President Dr. Arif Alvi has conferred Hilal-e-Pakistan on Turkish Foreign Minister Mevlut Cavusoglu in recognition of his services for international peace and security and for further strengthening Pak-Turkish ties.

The ceremony was held at Aiwan-e-Sadr in Islamabad. Foreign Minister Shah Mahmood Qureshi, Minister for Information and Broadcasting Shibli Faraz, and other senior officials also attended the ceremony.

As per the schedule, the Turkish minister will also hold meetings with top leaders including Prime Minister Imran Khan where both sides will discuss the mutual interest and bilateral cooperation.

ISLAMABAD – The foreign ministers of Pakistan, Turkey, and Azerbaijan will meet in Islamabad today for the second ...

This is the third visit of the Turkish Foreign Minister to Pakistan in the Pakistan Tehreek e Insaf reign.

The Foreign Office spokesperson said that the second round of trilateral talks between Pakistan, Turkey, and Azerbaijan will begin today.