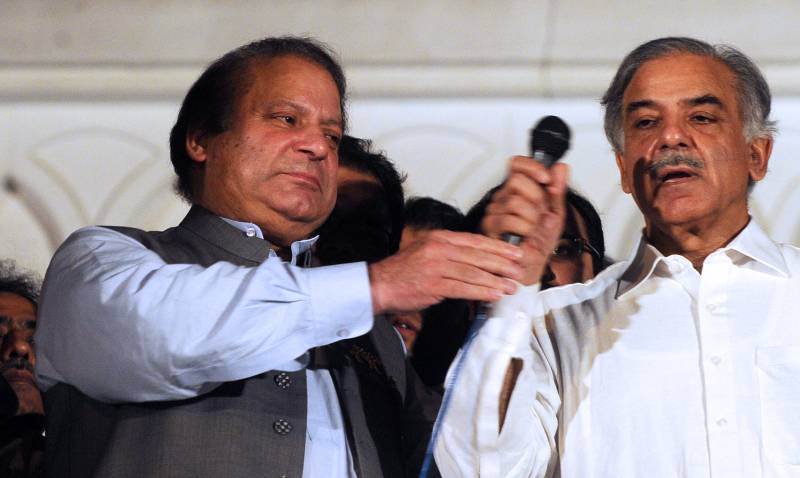 LAHORE - Chief Minister Punjab Shehbaz Sharif was elected unopposed the president of Pakistan Muslim League Nawaz, weeks after he took up the charge in an interim capacity.

The decision to elect the younger Sharif as party's president was made last month after the Supreme Court disqualified former Premier Nawaz Sharif from holding the presidency of his party.

After the top court verdict, announced in the Election Act 2017 case, Shehbaz's name was put forward, for the presidency, by his elder brother Nawaz Sharif during a party meeting and it was decided that the formal approval for such move would be taken after PML-N's General Council meeting.

The party’s general council will announce on Tuesday (today) that Shehbaz was elected as the president of the party as no one had submitted the nomination papers against him.

Humbled by the confidence my leader Nawaz Sharif & CWC reposed in me. Vow to work day in and day out to come up to the expectation of the party leadership & workers. The journey of progress will continue unabated IA.
اللّٰہ تعالیٰ ہمارے سروں پر نواز شریف کا سایہ ہمیشہ قائم رکھے!

This is not the first time that the 'Khadim-e-Alaa' would be serving in this capacity as he was elected president of PML-N twice — in 2002 and 2006.

Moreover, in March 2012, Shahbaz was elected president of the PML-N’s Punjab chapter.

Born in 1950, Shehbaz  Sharif started his political career as president of Lahore Chamber of Commerce in 1985, and later he was elected as the member of Punjab assembly in 1988.

In 1990, he became a member of the National Assembly and was again elected as MPA from Punjab in 1993 to become the leader of the opposition. His term ended in 1996 when the assemblies were dissolved.

In 1997, he became the chief minister of Punjab and served in this capacity till the bloodless coup of general Pervaiz Musharraf in October 1999.

He again became the chief minister of Punjab for the second time after PML-N won the majority number of seats in the province in the 2008 election.

After the May 2013 elections, he was again sworn in as the Chief Minister of Punjab, however, his elder brother's disqualification in the Panama Papers Case, might catapult him to the slot of Prime Minister after a victory in the next general elections scheduled in next few months.