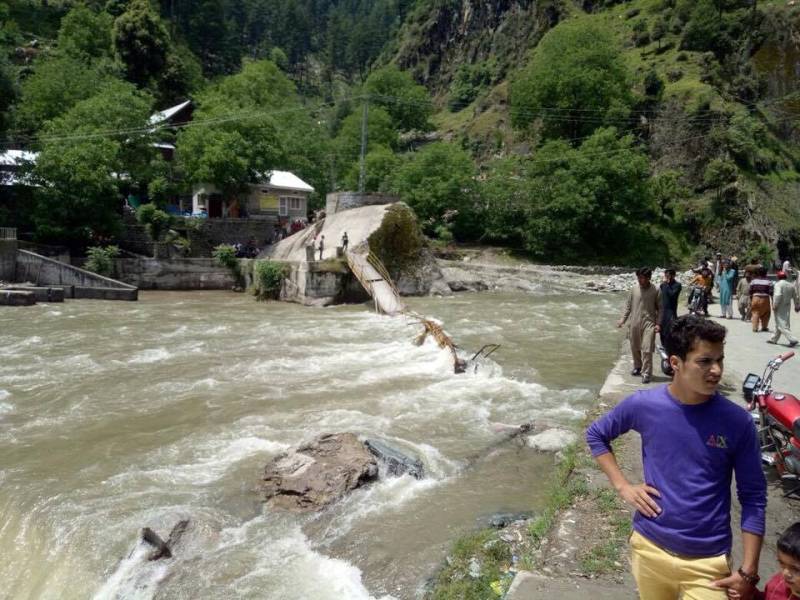 MUZAFFARABAD - More than 25 tourists were swept away and at least 12 of them were declared dead after a bridge collapsed in Neelam valley of Azad Kashmir on Sunday.

The Kundal Shahi bridge over the bourn of Jagiran in Neelam valley collapsed as it could not withstand the pressure due to overweight.

CHARSADDA - One man was killed while two others were injured when a bridge built on the Kabul River collapsed in Khyber ...

''Though we are yet to confirm an exact figure, it is believed that between 20 to 25 persons were standing on the footbridge when it crumbled,” said Mirza Zahid Hussain, the superintendent of police in Neelum Valley.

An operation is still underway to rescue the tourists, with authorities having rescued at least four people up till now.

An official at a control room in Muzaffarabad said that three of the deceased had been identified as Shahzeb, Abdul Rehman and Nadeem, adding that it was yet to be confirmed which city they belonged to.

He said eight students — identified as Anam, Alina, Waleed, Sajid, Hamza, Rashid, Zubair (all residents of Faisalabad) and Iqra Mazhar (resident of Multan) — were rescued and had been admitted to the District Headquarters Hospital Athmuqam where their condition was said to be stable.

Locals said the victims were likely boys and girls of a college that were touring the scenic valley.

Neelum valley is one of the most attractive tourist locations in the AJK, which draws hundreds of thousands of tourists from across the country, particularly in the scorching summers.

The area is, however, prohibited to foreign tourists because of its proximity to the heavily militarised Line of Control, the de facto border that splits the disputed Himalayan region between the nuclear-armed neighbours India and Pakistan.