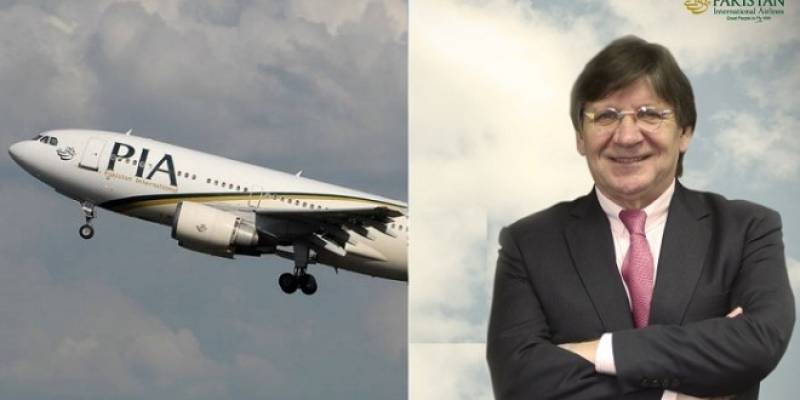 ISLAMABAD - The Minister for Parliamentary Affairs Sheikh Aftab Ahmad told the Upper House of the Parliament that the former acting chief executive officer (CEO) of PIA, Bernd Hildenbrand had taken a plane of national flag carrier to Germany while leaving Pakistan.

The issue of the plane was raised by Senator Tahir Hussain Mashhadi of the MQM who expressed that he had learnt that a Boeing plane of PIA had gone missing.

Confirming that the plane had gone missing, the minister said: “We have also formed a committee to probe the matter but it has not found any clue so far.”

On the other hand, the spokesperson for the national flag carrier,  Mashhood Tajwar clarified that the plane was not a Boeing plane, but was an Airbus-A-310.

“It’s not missing. It’s in Germany,” he remarked.

Mr Tajwar said the plane had been chartered by a British company for picturising a movie in Malta following which the aircraft flew to Germany, Dawn news reported.

"The plane had already completed its flying hours and was no longer airworthy. It’s a 30-year-old aircraft and had already been grounded."

Justifying the plane episode, he said heavy expenses were to be incurred in bringing the plane back to Pakistan so tenders were floated to "dispose it off what can well be termed a scrap".

He confirmed that the FIA had conducted an inquiry into the matter but the findings had not been shared with the PIA.

ISLAMABAD- In what appears to be a dubious deal, Pakistan's national flag carrier PIA, already infamous for pathetic ...

The German national had been sacked from PIA in April and his name had been placed on the Exit Control List (ECL) after a number of charges of corruption against him, including one about selling a PIA’s plane to a museum in Germany for a mere Rs 5.7 million.

Apparently, his name was struck off the ECL as he is believed to be in Germany right now.