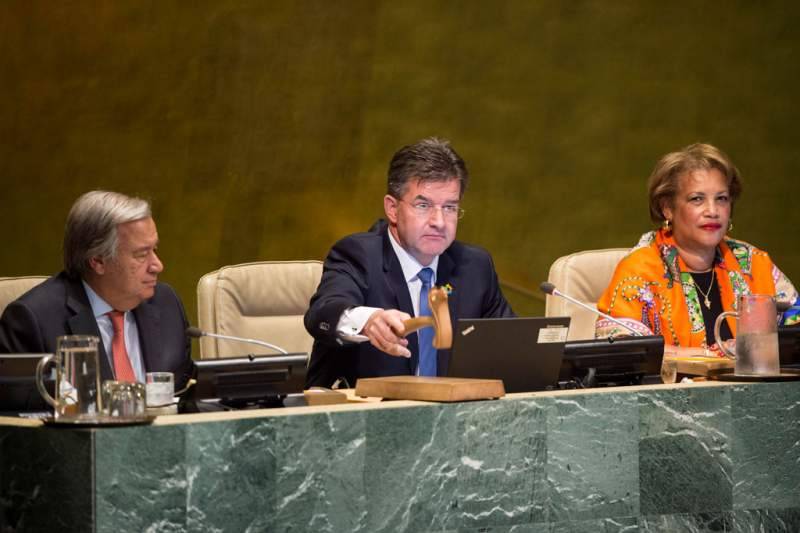 NEW YORK - The United Nations General Assembly kicked off its 72nd session on Tuesday, with an emphasis on striving for peace and a decent life for all on a sustainable planet.

General Assembly President Miroslav Lajčák in his first address in new capacity outlined the agenda of meeting as saying, "the session would see the negotiation of the first intergovernmental compact on migration and the signing of the first agreement on the elimination of nuclear weapons".

It would also be a year of follow-up in regards to maintaining the momentum in implementing and financing the Sustainable Development Goals and ensuring continued work on the Paris Agreement on climate change, he said.

“We must follow our commitments from yesterday with actions now,” Mr. Lajčák stressed, warning against relegating reports, events and resolutions of the past to United Nations archives.

He said United Nations reform was critical as the Organization today looked very different from the one which was established in 1945.  The United Nations had evolved over the years, and much of that change was seen through the Assembly’s revitalization process.  The organ must continue to contribute a fresh outlook, read a UN press release.

He went on to say that the work of the United Nations could often be complex and recalled that the Organization was created, first and foremost, for the people.  “The people who need the United Nations the most are not sitting in this Hall today,” he added.

Later, Secretary General António Guterres welcomed the President of the General Assembly, besides highlighting that the world today faced serious threats; from the proliferation of nuclear weapons to global terrorism, from climate change to inequality.

He called attention to the challenges posed by irregular migration, and the threat of cyberattacks.  People were rightly demanding change, which was the basis of the reform proposals that were under consideration.

Prime Minister Shahid Khaqan Abbasi is set to address the General Assembly on September 21. He will be accompanied by Foreign Minister Khawaja Asif and other officials.

This will be his maiden speech and visit to the United Nations after the announcement of the US policy on South Asia.

Pakistan has strongly denounced the US policy in which President Donald Trump had accused Pakistan of providing safe havens to terrorists.

Following his anti-Pakistan statement, Foreign Minister Asif kicked off his visit to regional countries including China, Iran, Turkey and Russia to develop a consensus for resolving Afghan conflict peacefully.