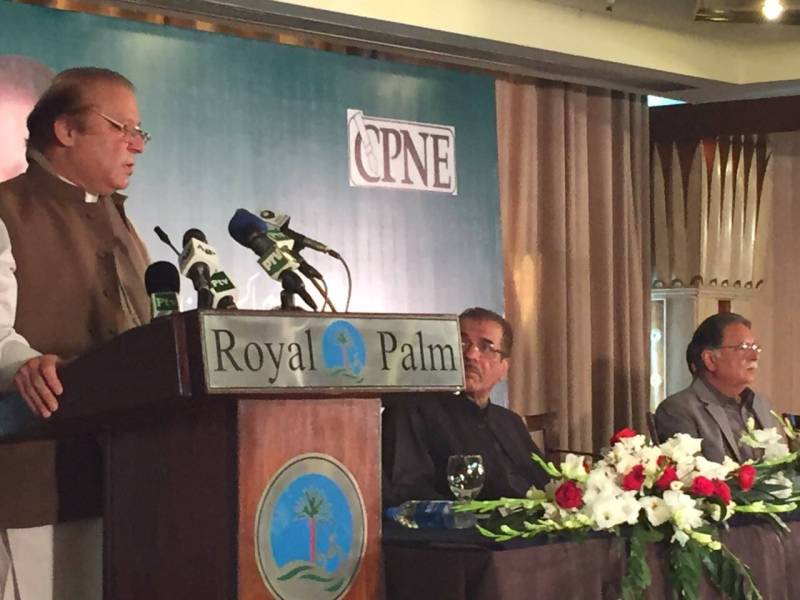 LAHORE (Web Desk) – Prime Minister Nawaz Sharif has said media’s role in strengthening democracy is vital and cannot be ignored. He said media played an important role in the recent years for the betterment of democratic rule but some media outlets role was not up to the mark during the sit ins “Dharnas” politics.

The Prime Minister said some journalists supported the dictatorship of General retired Pervez Musharraf. Similarly, he said the role of some media houses during the PTI-PAT sit-ins was also not up to the established norms of journalism. As a result of these sit-ins, several leaders of friendly states postponed their visits.

He urged the media to extend full support to the government in implementing National Action Plan against terrorism and asked not to indulge in the race of "rating" and play a balanced and constructive role on issues of national security.

The PM further said that had always been an advocate of journalists community and announced Rs 50 million endowment funds of CPNE.

Sharif said he believes in an independent judiciary and the media, however, he added the media should also hold itself accountable and evolve an effective code of ethics.

He said that the government was making all-out efforts to overcome the electricity shortage within its tenure, we have decided to generate 3,600 megawatt electricity through LNG. For this purpose, one hundred billion rupees will be allocated each year in the Public Sector Development Programme.

He said it is our utmost effort to provide low-cost electricity to the domestic and industrial sectors.

To a question, PM said the incident of Baldia Town factory inferno that claimed nearly 300 lives cannot be ignored.

Mujib-ur-Rehman Shami, President of the CPNE, said the history of journalists has been stuffed with sacrifices and if it is guide then everyone should come to know that media organizations faced hard times but refused to bow down before any kind of dictatorship.

He also regretted that a lion share of print media budget is being allocated to electronic media but we are not against it but govt must keep in mind print media has its own history and it is also called the mother of all media.