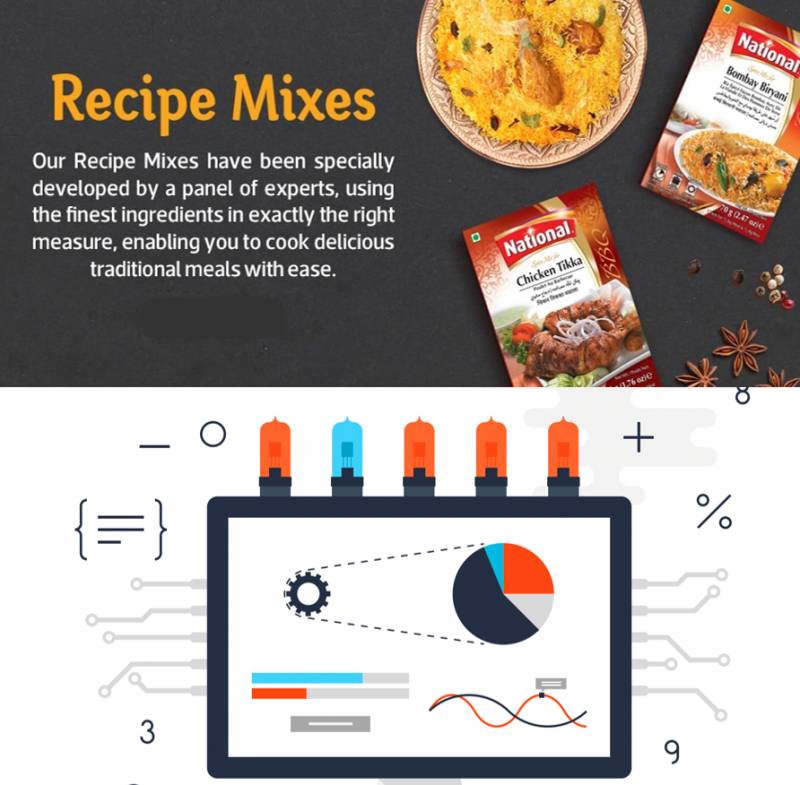 KARACHI – Representing about 0.169% of the US population at the time, in 2019 the United States Census Bureau estimated that 554,202 people in the US self-identified as Pakistani Americans. Meanwhile, Statistics Canada estimates that 202,260 people in Canada self-identify as Pakistani Canadians.

These two groups have plenty in common, from reasons to immigrate to religion, language, food, to culture. And while they adapt to their new lives, the culinary tastes of this immigrant group seldom change, which is where nostalgia comes in.

With over 250 products in over ten major categories, National Foods Limited (NFL) has been a staple in the homes of Pakistanis and other subcontinent nationalities for over 50 years. In a bid to reach its customer base in North America, the Pakistani-owned food products company launched a direct-to-consumer (DTC) store to ensure contactless delivery.

“After identifying the total addressable audience size, our main challenge came in the form of identifying the relevant audience to target,“ said Asad Abbas, a programmatic lead at BCP. “On its targeting parameters, the display network platform we chose was unable to identify the expatriate audience we intended to reach.”

To solve this, the programmatic team at BCP onboarded five local publishers to book their inventory through Google’s Display and Video 360 (DV 360) as they had relevant audiences that the media agency wanted to target.

The second-party data captured by Hamariweb & Urdupoint fed into integration with the Oracle BlueKai data management platform (DMP), which further fed into DV 360.

"Privacy laws, OS restrictions, privacy-protecting behaviors, and ubiquitous walled gardens are the four major forces making it difficult for advertisers to collect and activate consumer data at scale," said Abrar Ahmed, CEO at Webiz Media (Pvt) Ltd, which operates Hamariweb.com as the market leader in publishing. "This is why Webiz Media is working with a second-party data marketplace by Brainchild in order to offer advertisers the ability to discover high-value audiences in an efficient, controlled, and transparent manner."

In May, Brainchild launched a 2nd party data hub through premium publisher partnerships after months of experimenting with a data-backed targeting methodology.

"As data depreciation resets the digital media buying ecosystem by threatening most forms of online behavioral advertising, it limits most forms of digital and mobile measurement," said Zaki Baig, Head of Business at UrduPoint.com, the second-largest independent publisher in Pakistan based on Alexa data. "To continue with online behavioral advertising, advertisers and agencies must rely on their own first-party cookies and publisher data contracted through second-party marketplaces. This approach has ushered in a new wave of segment-level targeting and contextual advertising."

Based on affinities, intent, and topics of interest, DV 360 fed data into the open exchange. This is also where the DTC data on bottom-funnel activities such as conversions, purchases, checkouts, and ‘add to cart’ decisions are fed back to the open exchange using a code generated in Google called floodlight tag.

“Using a range of programmatic deals with Pakistani publishers with audiences from the US and Canada, the information was fed into advertising technology partners such as AppNexus, PubMatic, OpenX, and InMobi,” said Urooj Hussain, the portfolio director at BCP. “With data collected on the NFL site being exported back to the Oracle BlueKai DMP for further analysis and refinement, we saw the click-through rate spike between 4% and 18% after the second party data was introduced.”

Of the total addressable audience cited above, the team at BCP was able to reach 50% of the group using this approach, with the male to female split being 68% and 32% respectively, bearing in mind equal roles in grocery shopping and decision making in the household.

“We are very pleased with the results from this campaign, where the CTR rose to as much as 18%, an impressive feat given that double digits for a pilot attempt using second-party data are often unheard of,” said Rizwan Ali, head of digital & media at NFL. “We found that the Brainchild data hub has proven scalability, privacy compliance, and has improved targeting with every test & learn campaign we partake in.”

As part of its eCommerce product roadmap, NFL aims to have a top-of-mind preference for all residents of North America with roots in the subcontinent. With just one click, NFL aims to please expatriates with the ingredients rooted in their heritage, moving one step closer to helping them feel at home in recreating timeless meals and desserts with NFL’s range of recipe mixes, pickles, sauces, pastes, spices, salts, and spreads.

“The best practices employed by the Brainchild team ensured that using the inventory from branded data providers to scale targeting campaigns, they were able to create a unique set of in-market, highly brand-related consumers,” said Rizwan Ali, head of digital & media at NFL. “This approach helps advertisers create optimized brand messaging based on insights and analysis gained from audiences built with second-party data.”