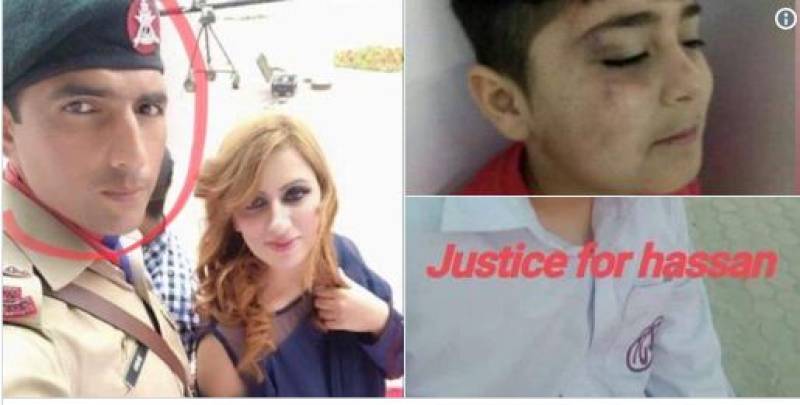 DERA ISMAIL KHAN – Netizens in Pakistan are calling for an action against an Army officer who allegedly tortured a child for engaging in a classroom fight with his son at an elite school in Punjab.

The online uproar follows the pictures and videos of Hassan, a student of the 3rd class, who was allegedly beaten up by Arbab Fareed, who serves as a Major at City School, Dera Ismail Khan.

According to reports in local media, the army officer had gone to the school in his uniform to thrash the young boy Hassan for fighting with his son.

Soon after, the pictures and videos of the major and victim Hassan went viral on social media.

Following the alleged torture, schoolboy Hassan emerged in a new video in which he is seen sharing how he was slapped by the father (Major Arbab) of his class fellow. The child also told his teachers that the man (Major Arbab) verbally abused his (Hassan’s) parents.

Social media users are now demanding justice for the child and are reacting strongly to the inhumane act through their posts.

Some have posed questions to the security measures for the students by the school management:

What the hell school was doing when this kid was beaten.

Some are bringing the matter to the notice of DG Inter-Services Public Relations (ISPR) – the military’s media wing:

‘Where was the school's principal?’ asked one Twitter user.

I will start from the principal of the school if he or she called the police yet? and what did the school do when this was happening?you put a selfie of someone with a cap & another in civilian clothes & termed him a major
where are the parents of the kid
solve the mystery for us

‘We are not sure if it is true?’ another wrote on the micro-blogging site.

So far we don’t know the whole story as Hassan's parents and school management have not responded to the matter. But we hope that the child recovers from this traumatizing incident. Children are angels, they should be dealt with them with love, care, and affection.