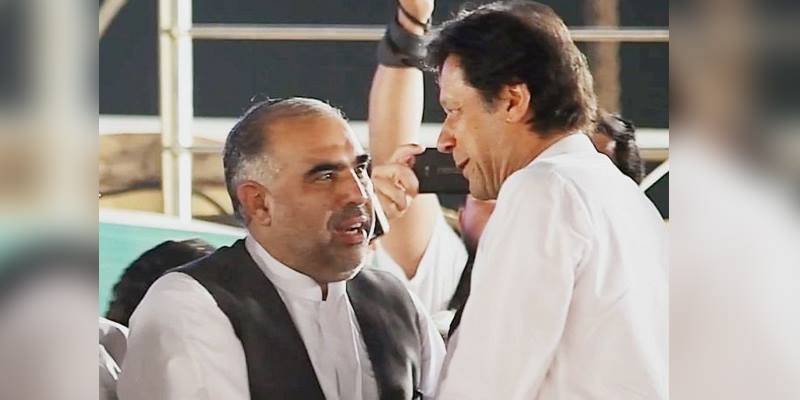 ISLAMABAD - Pakistan Tehreek-e-Insaf leader, Asad Qaiser was sworn in as the 21st Speaker of National Assembly after being elected to the post on Wednesday.

Qaiser was elected as Speaker of the Lower Chamber of the Parliament after 330 lawmakers exercised their vote through secret ballot.

As many as 8 votes were rejected, as per the results announced by outgoing Speaker Sardar Ayyaz Sadiq who administered the oath to Asad Qaiser.

The national Assembly session turned boisterous as soon as Qaiser occupied the post, with members of the opposition, especially from Pakistan Muslim league Nawaz chanting slogans like 'fake mandate unacceptable' and 'restore the sanctity of vote'.

The 15th National Assembly session was adjourned for 15 minutes by Asad Qaiser.

PTI chief Imran Khan also cast his vote and later he shook hands with outgoing speaker Ayaz Sadiq. Among other new lawmakers, PPP chairman Bilawal Bhutto Zardari, who has been elected to the National Assembly for the first time, also cast his vote in Speaker and Deputy Speaker election.

The Pakistan Tehreek-e-Insaf (PTI) and united opposition are in the run for the election of National Assembly speaker and deputy speaker positions.

The lower house of the parliament is observing a one-to-one contest for both slots as four candidates backed by the PTI and opposition alliance have submitted their nomination papers on Tuesday.

Former speaker of the Khyber Pakhtunkhwa Assembly Asad Qaiser and Qasim Suri have been fielded by the PTI for speaker and deputy speaker contest, respectively.

Syed Khursheed Shah of the Pakistan Peoples Party and Asad Rehman of the Muttahida Majlis-i-Amal (MMA) are the joint candidates of the opposition parties for the offices of speaker and deputy speaker, respectively.

Outgoing NA Speaker Ayaz Sadiq had announced the Tuesday as the deadline for the submission of the papers for the two positions at the landmark session of the lower house of the parliament on Monday.

Following the secret balloting in the elections, the elected officials would take the oath of their office the same day.

Talking to the media on Tuesday, the PPP leader remarked that he was confident of his victory in the election citing his decades’ long experience as a lawmaker and having good ties with the elected representatives.

Shah asserted that a functional parliament was important for a strong democratic state. He will be facing Pakistan Tehreek-e-Insaf’s Asad Qaiser for the post of Speakership.

PTI's Qasim Khan Suri said that the Lower House of the Parliament will be made fully functional adding that his party enjoys the majority in the house and he was confident of his victory. “Practical steps will be taken to address the problems of Balochistan,” Suri added.

On Monday, a historic development in country’s democratic process was witnessed as the newly elected members of the lower house of the parliament took oath in the inaugural session of the National Assembly.

Speaker Ayaz Sadiq administered the oath to the MNAs-elect in the landmark session for the 15 National Assembly.

The NA comprises 342 seats - 272 general seats and 60 seats reserved for minorities and women. The elections were held in 270 constituencies across the country as polls in NA-60 Rawalpindi were delayed due to disqualification of PML-N's Hanif Abbasi in a drug case and NA 103 Faisalabad polls were postponed after a candidate passed away.

In the inaugural session, 326 elected candidates took oath, while the remaining will be sworn in before the elections of the speaker and deputy speaker.

The PTI has 152 seats in the NA as some additional seats have been vacated by Imran Khan, Ghulam Sarwar Khan and Tahir Sadiq. Similarly, members of the others parties who won more than one seat also resigned from the additional seats. The by-polls on the vacated seats will be held within two months.

The Imran Kha-led party has also gained support from other parties including MQM-P, PML-Q, BAP, GDA and others and it is in strong position to clinch the both seats of the NA in today's election.

The PML-N has emerged as the largest opposition party with 82 seats, while PPP stood at third position with 53 seats.