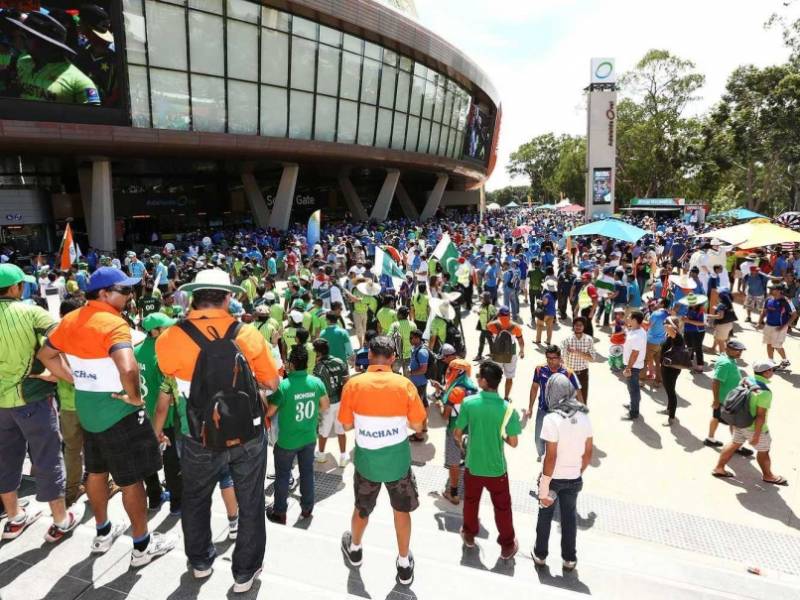 ADELAIDE (APP) - Cricket excitement reached fever pitch on Sunday as defending champions India take on bitter foes Pakistan in a World Cup blockbuster touted as the most watched encounter in the history of the sport.

The refurbished Adelaide Oval resembled a sea of blue and green -- the respective colours of India and Pakistan -- as fans began packing the sold-out stands two hours ahead of the start of the day-night game.

There were thousands without tickets waiting outside the stadium in temperatures already touching 38 degrees Celsius hoping to clinch a last-minute deal to get in, or at least have a glimpse of their heroes.

The ground can hold 53,000 spectators but the capacity for the World Cup was reduced to 47,000 to make space for sightscreens at both ends -- a loss for both the organisers and fans.

Tickets were sold out within 20 minutes when they went on sale online last year with officials saying that 80 percent of the tickets were lapped up by people outside South Australia, both from within and outside the country.

It will still not be the most-attended cricket match in Australia which does not feature the home team. That honour was reserved for the 1992 World Cup final between Pakistan and England that attracted more than 87,000 fans to the imposing Melbourne Cricket Ground.

But with the International Cricket Council (ICC) expecting television coverage for each match of the six-week tournament to potentially reach 2.5 billion people, Sunday's game is being projected to break all viewership records in cricket.

But for Indian and Pakistani fans, the immediate interest is the outcome of the Pool B encounter which they see as a final even though it is the first match between the two teams in the ongoing tournament.

"If there is anything bigger in cricket than a World Cup match between India and Pakistan, please let me know," said Rahil Seth, a 45-year-old Indian businessman from Melbourne.

"And may I remind you, India has won every time and the same will be repeated today."

Arif Hassan of Pakistan was equally confident his team will end the string of five successive defeats to India in the World Cup.

The hype and excitement over the past two days in Adelaide left many Australians puzzled.

"What's the fuss about, why do you guys fight so much because you speak the same language?," a bewildered shopkeeper asked.

A young volunteer in the media centre at the Adelaide Oval politely asked an ICC official if journalists from the two countries will be segregated in the press box.

The official had a hearty laugh. "Nothing of the sort," he said. "They get along very well with each other."