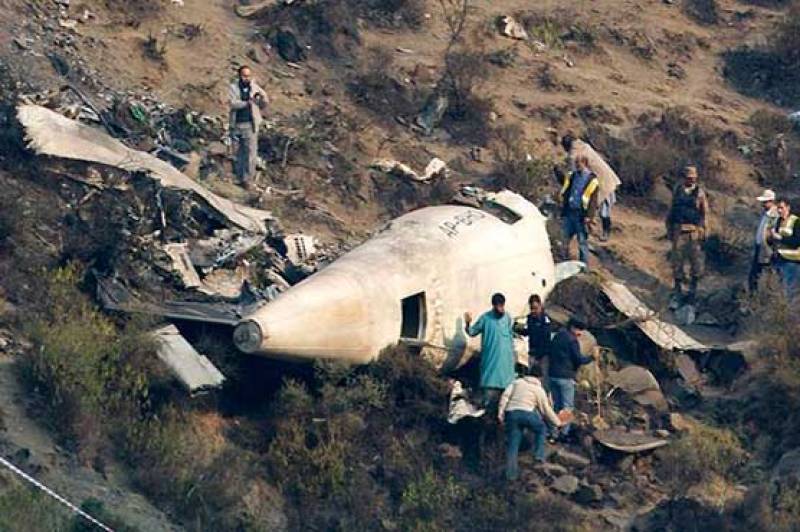 LAHORE – A former PAF Avionics engineer has raised his own theory behind the deadly crash of a PIA flight into the mountains near Havelian tehsil of Abbottabad in 2016.

In a series of tweets, the former PAF engineer pointed out that “the fatigue induced breaking off of a turbine blade in the aircraft's No. 1 engine - is not the final cause of the crash …The failure of one engine should not have resulted in a crash.”

So there have been some findings from the PK 661 ATR crash investigation's Safety Investigation Board have been made public https://t.co/wt2DoUxNOX

The engineer also said that “a few days after the crash there was an audio recording between the ATC at Islamabad airport and PK 661's … giving a partial picture of how the crew and aircraft were behaving after the loss of the Engine.”

About the engine failure, he was of the view that the only other reason is that the engine No. 1 faced an issue with 'feathering’…. the crew would have applied Maximum Continuous Thrust to no. 2 Engine, but the drag from the non-feathering no. 1 Engine would have produced massive yaw”.

Daaniyal also speculated that “the loss of altitude was 'controlled' so to say, i.e., at no point in time did the crew give an impression the plane was unmanageable.” Again, I have only the ATC communication to go on, he added.

The former PAF engineer further states, “the loss of altitude is confirmed by the ATC telling them he couldn't paint PK 661 on the radar and he thought their transponder had gone off… indicating that they had descended lower than a height at which the radar could paint them”.

ISLAMABAD — The Safety Investigation Board (SIB) of Pakistan, in its report, has blamed the maintenance department of ...

He also added,“1st distress call about a loss of engine was at 7500 34NM miles out… the comms between the ATC-Crew at now time show the crew in any state of panic. So one has to assume they felt they were in control… So just to explain more why I *think* it was the shutdown of the good engine that caused the crash in the case of #PK661,” he said.

On Dec 7, 2016, the PIA aircraft ATR42-500 (PK-661) en route to Islamabad from Chitral had crashed into the mountains near Havelian tehsil of Abbottabad, killing all the 47 people on board, including singer-turned-evangelist Junaid Jamshed.

The SIB, an independent body that comes under the aviation division, has recently shared its report with the CAA and PIA about the unfortunate crash by saying that the Civil Aviation Authority (CAA) lack of oversight may have caused the plane crash.